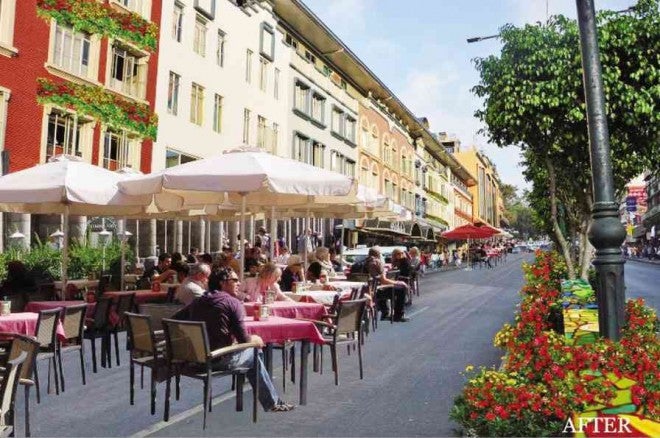 BELIEVE it or not, this could be downtown Session Road in Baguio City if it turns into a pedestrian mall, in this artist rendition by Teresita Enciso. JOEL ARTHUR TIBALDO/CONTRIBUTOR

Time and again, the idea of converting Baguio City’s main streets into pedestrian malls has been advocated as quickly as it is abandoned once irate businessmen step in to quash that proposal.

For the last 10 years, Joseph Alabanza, former presidential assistant for urban planning, and architect Rafael Chan have championed the pedestrianization of downtown Baguio as a return to the city’s cleaner and friendlier community environment.

But local businessmen almost always win out by trumpeting the traffic jams that develop each time Session Road is closed to vehicles, such as during the Session in Bloom week of the annual Panagbenga (Baguio Flower Festival) in February.

A prominent businessman last week said the volume of vehicles passing through city roads at a given hour has become so great, “that shutting down a major street like Session Road would back up traffic all the way to the outskirts.” He said pedestrianization was no longer possible for the overpopulated Baguio.

On Monday, pedestrianization again became part of the conversation, partly in reaction to television news reports that the World Health Organization (WHO) has labeled the summer capital as the country’s most polluted city due to its deteriorating air quality.

Bonifacio Magtibay, WHO country director in the Philippines, had written Mayor Mauricio Domogan to explain that it never made that conclusion about Baguio’s air quality, having focused on air quality trends over time in various parts of the world.

But the WHO report does establish that outdoor (ambient) air pollution in the lower sections of downtown Baguio, much like many cities worldwide that it monitored, had failed “to meet WHO guidelines for safe levels, putting people at additional risk of respiratory disease and other health problems.”

The Baguio Heritage Conservation Society had endorsed a “central business district revitalization and sustainable mobility” study to the weekly executive-legislative meeting at City Hall, which addresses the city’s pollution issues.

The study classified the core business center of Baguio as “dysfunctional, due to factors like air pollution and traffic congestion.”

It said that an improved business climate for Session Road was likely once the government removes stress-producing factors like heavy traffic, pollution and the anxiety created by the congestion of people and vehicles in a relatively narrow business area.

Freed from these kinds of stress, people who walk along Session Road have the tendency to spend more than people who drive through downtown Baguio, according to the study, a graduate thesis of Michelle Bacalla-Garcia, an employee of John Hay Management Corp.

Garcia said she took her cue from shopping malls, which rely on sales and marketing models that describe the “economies of movement” or the amount of transactions that are probable within a given space.

She said a heavily crowded area, like a Session Road traffic jam, reflects a trade-off in missed sales opportunities for downtown businesses and more expenses for people caught in traffic.

Some entrepreneurs assume that people with vehicles are high-spending customers.

People who walk, on the other hand, “have increased spending power, and are therefore potential consumers for downtown Session Road,” she said.

Her study also laid out a scheme for “traffic calming,” by proposing a universal shuttle system circling the downtown area to ferry people to the nearest jeepney or taxi routes, which would be relocated outside the downtown area.

This would discourage driving to the heart of the city and reduce pollution, Garcia said.

Walking is an appropriate means of travel for the city’s cool weather, and is pollution-free, she said.

The idea of a pedestrian mall “will have higher patronage if air quality, parking and traffic congestion are addressed over time,” the study said.

Regardless of social sector type, Baguio residents who were surveyed “agree that the current traffic system of Session Road and its peripherals does not appeal to them and perceiving a form of pedestrianization … would make the city center more attractive,” Garcia said.