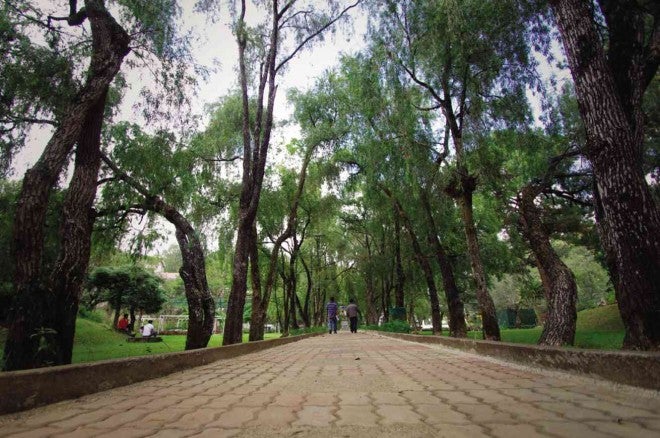 THE GARDENS and tree-lined walkways of Baguio General Hospital and Medical Center offer patients and visitors a quiet and refreshing area to relax. RICHARD BALONGLONG

Whenever he is stressed from work, Dr. Jimmy Cabfit often takes a few minutes off to relax and meditate at the gardens of Baguio City’s only public hospital.

“At least 10 minutes of meditation here gives me a new way of seeing things,” says Cabfit, chief of Baguio General Hospital and Medical Center (BGHMC). The 400-bed hospital caters not only to locals but also to patients from central and northern Luzon.

Cabfit says he is happy to see relatives of patients also taking time off to relax in the “BGHMC Gardens,” a series of small flower patches at the hospital’s slightly sloping terrain.

The almost-a-hectare BGHMC Gardens are among the few treasures in this overly developed city of over 300,000, where remaining open spaces and parks continue to be threatened by concrete and asphalt.

Already, informal settlers are around the borders of the 27-hectare hospital compound.

With at least 5,500 people living on each square kilometer of the city’s 57.51-sq-km territory, whatever remaining open spaces help the city breathe, concerned citizens say. This, they say, is particularly so if the open spaces still carry trees, plants and flowers.

The good news is that the BGHMC advisory board, whose representatives come from both public and private sectors, has asserted that the hospital retain its garden, the only medical facility in Baguio with such an open space.

“Plants and trees have the power to help heal people,” says lawyer Damaso Bangaoet Jr., who chairs the board. He says maintaining, sustaining and enhancing the hospital gardens help fulfill BGHMC’s role as a “rejuvenation and wellness center.”

Since February 2012, when the BGHMC Gardens project was launched, some families, groups and institutions have committed to add more trees, plants and flowers in some spaces.

This year, in late February, they inaugurated the DOT-CAR (Department of Tourism-Cordillera Administrative Region) Gardens. The blooming flowers cannot be ignored as one strolls along Rosa Bautista Walk, a tiled pathway beneath a row of bottlebrush and alnus trees that leads to the other parts of BGHMC Gardens.

The late Rosa Bautista is the wife of the late Dr. Fernando Bautista, who both founded what was to be known as University of Baguio.

The DOT joins other sectors in vowing to keep, improve and secure the gardens. “Health and wellness are among the tourism department’s products,” says Purificacion Molintas, Cordillera tourism director.

In 1902, the Americans, seeing Baguio as a “vacation and recuperation center,” established Baguio Sanatorium, a 15-bed hospital under Dr. Eugene Stafford, which catered to American colonial officials, employees and soldiers.

In 1907, Baguio Sanatorium was renamed Baguio Hospital after a nurses’ home and six three-room cottages for tuberculosis patients were built.  The facility later became BGHMC.

As part of history’s remnants, it is only proper to maintain and sustain BGHMC with its gardens, which the Americans also introduced, Molintas says.

Maintaining the gardens and convincing others to tend home gardens would help market Baguio as a destination, she says. “This would help revive fond memories of the 1960s when yards must be adorned with flowers and when visitors would recall Baguio as a city of flowers,” she says.

“Those were the days when the police would come to check if your yard had flowers and if your laundry was at the backyard clothesline, not in front.”

Among the notable gardens is the Japanese Garden set up by Masahiro Okuda, a BGHMC board member. A stone’s throw away from the hospital’s main building façade, the garden is home to eight cherry blossom seedlings planted in February 2012.

Okuda says the cherry blossom trees, especially after they start blooming with flowers in a few years, are important for BGHMC.

“As the Japanese believe, the [flowering] cherry blossoms help revitalize the soul and the mind so the garden is perfect for patients, watchers, visitors and employees,” he says. “The garden, too, is where people can meet old buddies, reminisce the past, and meet new friends.”

Another is the Bangaoet Garden, which is adorned with circular trellises for flowering vines. Set up in April 2010, this garden was inspired by the dap-ay of Sagada and other towns in Mt. Province, Bangaoet says.

The dap-ay, a circle of well-chosen stones designed for sitting, is where community elders meet and discuss about community concerns.

Similarly, people could meet in the garden to tackle some concerns or they could meet here “to seek comfort in the Lord” in quiet meditation and prayer, Bangaoet says.

Groups, such as the Rotary Club, the various divisions of BGHMC and the BGH School of Nursing Class 1972 maintain or support BGHMC Gardens.

The only additional built-up facilities are a rest room equipped with shower and a small food court. Built in 2012, both facilities primarily cater to watchers of patients, Bangaoet says.

Those who have to use the toilet and shower have to pay a minimal P5 fee, which helps pay for maintenance personnel and for the loan to build the facility, he says. Without the pay toilet, some people would make any part of the garden their “open toilet.”

“Hygiene must be part of the hallmarks of BGHMC Gardens,” he says.

Formerly an unkempt waiting shed, the food court has since been rented out to 10 stall keepers. The rent also helps pay for a loan by the board and provide for the hospital’s “Indigent Medicine Fund,” which has since been raised to P40,000 monthly, Bangaoet says.