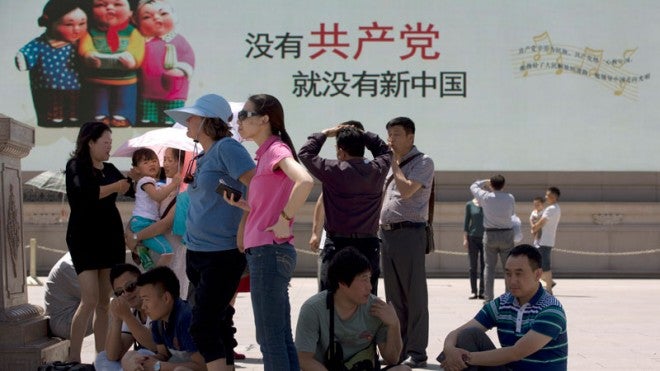 In this Wednesday, May 28, 2014 photo, Chinese visitors gather underneath a shadow from a lamp post near a giant electronic screen showing Chinese government propaganda song lyrics reading “Without Communist Party, there is no new China” on Tiananmen Square in Beijing, China. Communist leaders have spent 25 years making sure there is no opportunity to discuss the 1989 Tiananmen crackdown that crushed pro-democracy protests at a cost of hundreds of lives. Far from easing off as China went through three changes of ruling party leadership and a revolution in social media, a relentless campaign aimed at erasing public memory of the most tumultuous event of the past three decades has been steadily updated and tightened. (AP Photo/Andy Wong)

BEIJING — Remember June 4, Shi Shusi asked the 1.5 million readers of his popular microblog last year. Moments later, his postings were erased. A note from the microblog operator said they were “inappropriate publicity.”

This year, a discouraged Shi hasn’t posted anything about the anniversary of the 1989 crackdown that crushed pro-democracy protests at a cost of hundreds of lives.

“Major media treat it as if it never happened,” said Shi. “Fewer and fewer young people get to know this issue. There is no opportunity to discuss it nowadays.”

Communist leaders have spent 25 years making sure of that. Far from easing off as China went through three changes of ruling party leadership and a revolution in social media, a relentless campaign aimed at erasing public memory of the most tumultuous event of the past three decades has been steadily updated and tightened.

1989 is hardly the only taboo for the ruling party. Tibet, Taiwan, the Falun Gong spiritual movement — all are subject to limits on what newspapers, bloggers and others are allowed to say. But even among the most explosive topics, 1989 stands out. Almost any mention is prohibited.

“June 4th is especially sensitive not only because of potential criticism for the government but because people can use it as a jumping-off point to bring people together,” said Jason Q. Ng, a researcher at the University of Toronto’s Citizen Lab who follows Chinese efforts to censor Internet content.

“That is even more terrifying to them,” he said.

After the crackdown ordered by then-supreme leader Deng Xiaoping, communist leaders tried briefly to convince a skeptical Chinese public that violence against unarmed protesters was necessary to prevent a national disaster.

Leaders tried to evoke fear of a return to the chaos of the 1966-76 Cultural Revolution, when radicals ravaged the country. State TV showed rowdy pro-democracy protesters and restrained soldiers. Spokespeople rejected reports of unarmed protesters being killed as anti-Chinese propaganda.

“People just didn’t buy that,” said Jeffrey Wasserstrom, a historian at the University of California, Irvine, who studies Chinese student protest movements. “They had to stop telling that story and say, ‘Let’s not talk about this at all.'”

The upheaval cut short a trend in the late 1980s toward the ruling party allowing state-controlled media more freedom.

Then-party leader Zhao Ziyang had told regulators to ease press controls, which he said would “make things better.” Newspapers responded by reporting on public frustration at corruption and social controls.

After the crackdown, Deng fired Zhao and replaced him with Jiang Zemin. He presided over a new strategy — “correct guidance of public opinion.” It set the tone for pervasive controls over the next three decades as readers shifted from newspapers to websites to smartphones.

The Tiananmen crackdown “is absolutely crucial to understanding the way press censorship works today,” said David Bandurski, editor of the China Media Project at Hong Kong University. “The notion was that you have to control public opinion through media control to maintain social and political stability.”

Commentators who hoped the rise of satellite TV, the Internet and social media would loosen the party’s monopoly on power were disappointed. As millions of Chinese went online and acquired smartphones, Beijing spent heavily to develop high-tech filters.

The size and cost of official censorship efforts is secret but China is believed to operate the world’s most extensive system of monitoring and filters.

Each year ahead of June 4, mobile phone users engage in a cat-and-mouse competition with telecom carriers as they try to find new code words to evoke the anniversary in messages — such as calling the date May 35th — while censors try to detect and block them.

Censors added “Shanghai Composite Index” to the list of banned terms on June 4, 2012, after the country’s stock market benchmark opened that day at 2,346.89 points — which could be read as the 23rd anniversary of June 4, 1989 — and ended down 64.89 points, which also looked like the date.

Private sector operators of blog, instant messaging and other social media services are required to employ teams of censors at their own expense.

“The primary mechanism is fear,” said Bandurski. “They know if they don’t comply, they lose access to the market.”

On Tuesday, Beijing announced a crackdown aimed at popular instant messaging services used by some journalists and activists to distribute news reports and comments. The government complained such services are misused by “hostile forces at home and abroad.”

Google Inc. closed its mainland China search engine in 2009, saying it no longer wanted to cooperate with censorship after hacking attacks aimed at stealing the company’s operating code and breaking into email accounts were traced to China.

China is hardly the only government to try to stamp out volatile memories. In the 1980s, South Korea’s then-military rulers forbade discussion of the 1980 killing of pro-democracy protesters in the southern city of Gwangju.

The Communist Party also has tried to blot out memories of a 1959-61 famine historians believe killed as many as 50 million Chinese.

The party has kept at it despite rising numbers of Chinese who live or travel abroad, where information about 1989 and iconic images, such as the photo of a protester standing in front of a column of tanks, are freely available.

“Fat Years,” a 2009 novel by Hong Kong author Koonchung Chan, depicts a China whose rulers cause the whole population to forget a month when a devastating upheaval and crackdown occurred. The thinly veiled metaphor for 1989 was a bestseller in Chinese-language markets abroad and copies circulated widely in China. But no mainland edition was published.

Despite the scale of the task, the government has succeeded at stifling public discussion. If younger Chinese know about the crackdown, it is only through hearsay. Some parents say they avoid telling their children so they are not burdened with the knowledge.

Even among students who might be able to investigate the events, many seem not to care. Raised in an education system drenched in nationalistic propaganda and pride in two decades of strong economic growth, they see 1989 as a distant event and have trouble identifying with the protesters.

“Many people are not willing to spend time reflecting on this event,” said Lu Qiuxuan, a university student in Beijing.

The party gives no sign of relenting on June 4. After he became party leader in 2012, President Xi Jinping made clear his lack of interest in easing information controls by ordering journalists to undergo Marxist training. He is due to stay in power for a decade.