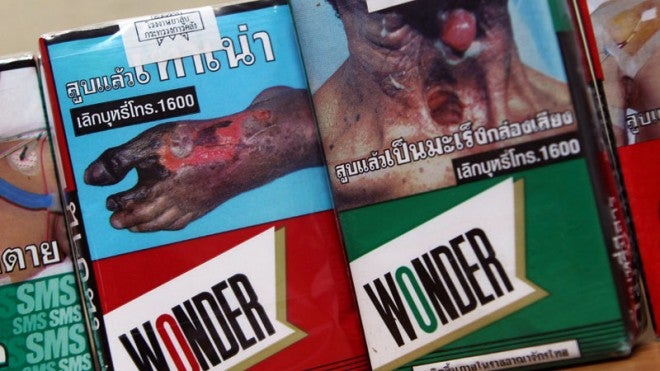 Tobacco control crusaders on Monday came to the Senate to push for the immediate passage of the Picture-based Health Warning Act of 2014, which will require tobacco companies to place pictures or graphics on cigarette packs to warn of the hazards of smoking, similar to these printed on the cigarette packets on sale in Bangkok, Thailand. AP PHOTO/APICHART WEERAWONG

MANILA, Philippines–With sales down following the imposition of the sin tax on cigarettes, antismoking advocates now want pictures or graphics depicting the hazards to health of smoking prominently displayed on cigarette packs.

Tobacco control crusaders on Monday came to the Senate to push for the immediate passage of the Picture-based Health Warning Act of 2014, which will require tobacco companies to place pictures or graphics on cigarette packs to warn of the hazards of smoking.

Senate Bill No. 27 is set to be voted on second reading this week after the measure took on several amendments, some not to the liking of the tobacco-control advocates, last week.

Sen. Pia Cayetano said she expected the measure to pass on third reading before Congress adjourns on June 11.

“In all my years of being its main advocate in the Senate, this is the first time the graphic health warning bill has reached this stage. I am happy and excited and admittedly still quite surprised by how far we have come,” Cayetano said in a statement on Monday.

At a news briefing at the Senate, representatives from Health Justice and the Southeast Asia Tobacco Control Alliance (Seatca) called on Congress to ensure that the pictures and graphics on the cigarette packs are big and displayed on the tops of the packs and not at the bottom as proposed by tobacco manufacturers.

Patrick Lozano, who represents the youth in the group, showed reporters a sample of a cigarette pack with the graphics placed at the bottom. Lozano said the graphics could not be seen when one held the pack.

Doroteo said they hoped Congress would be able to keep the size of the pictures and graphics to between 50 percent and 80 percent of the tops of packs.

He said that among the members of the Association of Southeast Asian Nations, so far, Brunei, Malaysia, Singapore, Thailand and Vietnam had picture health warnings on cigarette packs sold in those countries.

Thailand has the largest picture health warning on cigarette packs with 80 percent of the front of the pack covered.

Doroteo said that 70 countries had already complied with the World Health Organization Framework Convention on Tobacco Control (FCTO), which requires, among other things, the use of health warnings on tobacco packs and labels. The Philippines signed the FCTO in 2005.

“We are six years behind compliance,” he said.

Doroteo and Irene Reyes of Health Justice also hoped the Senate would not allow a proposal that would see the government consulting tobacco firms when firming up guidelines for the measure.

Also pushing for the immediate passage of the measure was Emil Roxas, president of New Voice of the Philippines, who lost his voice to lung cancer.

Roxas, speaking through an electronic device he held to his throat, said he started smoking when he was 17 and cigarette packs did not carry pictures or warnings against smoking.

More smokers worldwide than in 1980—study