Filipino nabbed in bombing that killed 2 US troops 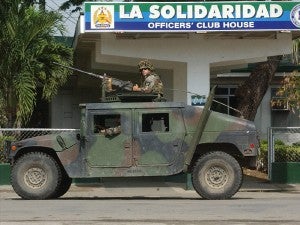 US Army on board the US Humbee vehicle manning the perimeter area of the Southern Command Headquarters. INQUIRER FILE PHOTO

MANILA, Philippines — Philippine police on Sunday captured a suspected Muslim rebel bomber who allegedly was involved in a 2009 land mine attack that killed two U.S. Army Special Forces soldiers and a Filipino marine in a restive southern province.

Miraji Bairulla did not resist when policemen, backed by Philippine marines, served a warrant for his arrest in the town of Indanan in Sulu province, police Senior Superintendent Abraham Orbita said. Bairullah, who uses the rebel name “Mahang,” is a bomb expert for the Moro National Liberation Front rebel group, he said.

Bairullah was among militants who placed a powerful land mine that hit and caused a passing Humvee to flip over, killing two U.S. soldiers and a Filipino marine on Sept. 29, 2009, in an isolated stretch of a coconut tree-line dirt road in Indanan, Orbita said. Two other Filipino marines were wounded in the attack.

No gunbattle ensued after the land mine blast.

The American and Filipino troops came under attack while en route to deliver food and other supplies to U.S. Seabees helping construct a school building and dig a water well for poor villagers of Kagay village in Indanan, a hilly farming town where militants belonging to the Moro National Liberation Front and the smaller but more violent Abu Sayyaf have had an active presence.

U.S. and Filipino forces appeared to have been lured to pass through the land mine-ridden hinterland at the time by the militants, who resented the construction of school building and other projects by outsiders. U.S. military personnel usually traveled by helicopters for safety, but villagers often flew kites, an aviation hazard that prompted the Americans to travel by land, security officials said at the time.

Hundreds of American military personnel have been providing counterterrorism training and advising Filipino troops battling al-Qaida-linked Abu Sayyaf militants in southern provinces including Sulu since 2002. That year, an American Green Beret was killed by a bomb outside an army camp in southern Zamboanga city in an attack blamed on Abu Sayyaf militants.

The Moro National Liberation Front was once the largest Muslim rebel group in the south, homeland of minority Muslims in the largely Roman Catholic Philippines, until it signed an autonomy deal with the government in 1996. Many of the rebels, however, held on to their firearms despite the peace deal and later resumed attacks. Others defected from the Moro group and organized the Abu Sayyaf in the early 1990s.