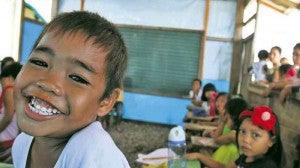 MANILA, Philippines—After drawing much criticism, the Department of Education ruled out on Friday a proposed three-day school week schedule planned by its field officials for some Caloocan City public schools to alleviate the problem of congestion.

With schools set to reopen on Monday, DepEd officials said they would work out a student transfer and shuttle service arrangement instead for overcrowded schools in Valenzuela City, Caloocan City and Quezon City.

“We will not implement the three-day school week this school year because we haven’t finished our study,” Assistant Secretary Jesus Mateo said at a news conference Friday.

In their last news conference on Tuesday,  DepEd officials said some congested Caloocan City schools considered dividing its student population in half and have each group come to school alternately.

While parents have opposed the idea, DepEd officials indicated they would hold on to the plan as a “worst-case scenario” should the schools be unable to handle the influx of late enrollees on school opening on June 2.

“We didn’t change our mind. We said this is one of the options for all these crowded schools,” Mateo said.

He said among the problems they see in cutting school days from five to three are whether the pupils’ attention span can cope with longer class hours every day, the impact on the teachers’ working hours and “resource requirements.”

DepEd regional director for Metro Manila Luz Almeda also had to issue a memo on Friday calling off the implementation of the three-day school week.

“Upon the instruction from DepEd central office, the implementatiom of the three-day work week schedule of  classes starting June 2, 2014 is temporarily discontinued pending the results of further studies,” Almeda said in her memo.

Looking for other options to deal with classroom overcrowding, Mateo said they are still in discussion with the Caloocan City government to implement a student transfer scheme.

He said such scheme has so far been arranged in Valenzuela City, where at least 140 late enrollees in the congested Malinta Elementary School- Pinalagad Annex will be picked up daily from that school, brought to the Karuhatan West ES and then returned to the former school in four to six DepEd vans.

The city government reportedly agreed to shoulder the fuel cost for the entire year.

“Through this transfer service we can protect the class size in Pinalagad Annex and Karuhatan (West) has the extra space,” Mateo said.

He said they were close to coming up with a similar arrangement with the Quezon City government.