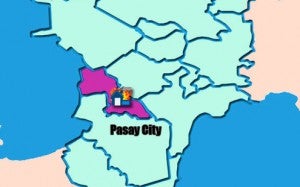 MANILA, Philippines—Eight female workers trapped inside a DVD warehouse in Pasay City died of suffocation as the building was engulfed at the early hours of Friday died‎ of suffocation.

A Bureau of Fire Protection (BFP) official said the eight women were inside a padlocked room at the second floor of a warehouse along P. Samonte Street in Barangay (village) 47 when the fire started at 12:45 a.m.

Senior Inspector Romeo Pepito Jr., Bureau of Fire Protection Fire Arson Investigation chief, told INQUIRER.net in a text message that the charred bodies of the trapped workers were found piled inside the room.

The victims were natives of Dumaguete and Cagayan de Oro.

Batan said eight other workers survived as they were able to escape from the room by climbing the rooftop.

They were taken to the Pasay City General Hospital but were discharged after being treated.
‎
Although the fire only reached second alarm, firefighters had difficulty putting out the fire. It was only put under control around 3:02 a.m.

The warehouse was owned by a certain Juanito Go, 68, a Chinese businessman.

In a television report, Go denied locking up the stay-in workers, insisting that he had no idea why the room was padlocked.

Go was placed under the custody of the Pasay City Police for investigation. With a report from Nestor Corrales

Read Next
PH getting cooler as wet season nears
EDITORS' PICK
DOH checking if 3 COVID cases due to Omicron
PH falls short of target of 3-day nat’l vax drive by 1M jabs
Holidays made best with Acer’s ‘Holidays at Home’ raffle promo
Smart offers wireless fiber-like speeds to Filipino homes with country’s first 5G Prepaid Home WiFi
Two more sites at Robinsons Malls for temporary offsite passport services
Gov’t fine-tunes alert level system
MOST READ
Isko’s messaging takes a turn as he commends Duterte
Roque ‘hurt’ after presidential aspirant did not adopt him in Senate lineup
Pharmally’s Twinkle Dargani in tears when asked about missing documents
Gordon to Duterte: ‘How dare you ask for Filipinos’ vote when you failed them?’
Don't miss out on the latest news and information.