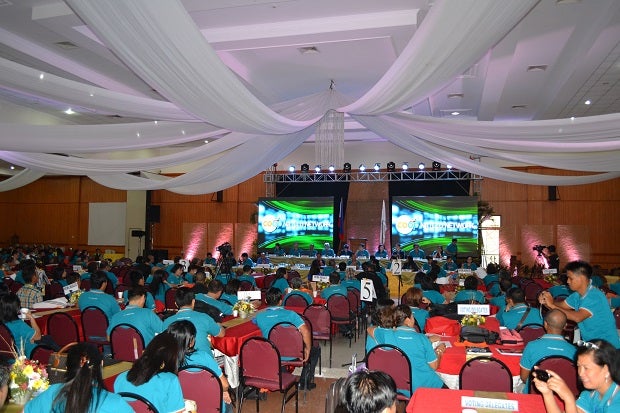 LAOAG CITY—The National Confederation of Cooperatives (NATCCO) concluded its 2014 General Assembly on a high note, being the most attended ever, according the NATCCO chairman Jose B. Ebron.

He reported to the more than 600 delegates that the meeting had a quorum of 80%.The NATCCO Network is a federation of almost 700 cooperatives nationwide, with combined offices at 1,236 locations all over the archipelago, and managing P65.1 Billion assets of 2.3 million individuals.

Theme for the event was “Advancing Solidarity & Collective Development Through an Integrated Network,” focusing on integrating the member cooperatives with standardized services, pooling resources and one branding to prepare co-operativesfor the Asean Economic Integration scheduled at start of 2015.

Ebron reported that some of the “major strides” of the Network were increasing membership and increased patronage of NATCCO’s services by member co-ops.

“We have appointed a Mediation & Conciliation Committee, Ethics Committee, and IT Committee and organized regional Youth Committees,” he said.

Internally, the NATCCO has improved operational policies on Human Resources and Auditing, including an Enterprise-Wide Risk Management Workshop producing a “risk map” that identifies and categorizes risks according to probability and severity.

Also announced was NATCCO’s being a Third Party Strategic Investor in the Network Consolidated Cooperative Bank  with authorization of the Bangko Sentral ng Pilipinas, and will be fully operational by next month.  51 ATMs have been set up the NATCCO IT Group in co-ops since 2010.

Another IT-based service was piloted recently in Benguet Province – Point-of-Sale or POS – in Benguet Province where NATCCO ATM cards can now be used for shopping and loan payments at the co-op. 12,000 co-op leaders and staff were also provided training in co-op operations by the NATCCO Network’s Training Group in 2013.  This is expected to increase exponentially as E-Learning, or online training, was launched recently.

NATCCO eyes expansion in next 5 years