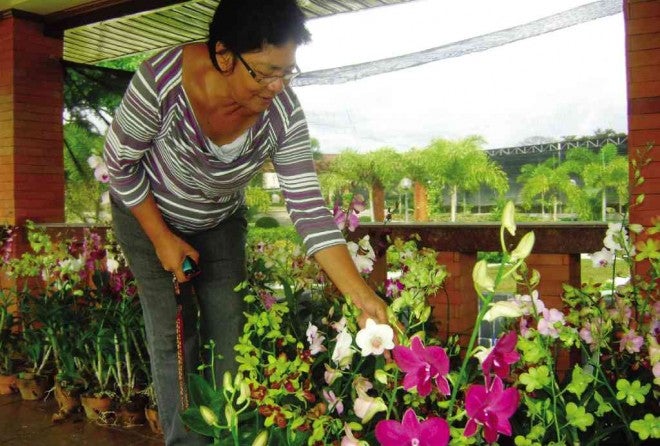 “BABY” Pascual-Fungladda tends to her orchids in her farm in San Jose City, Nueva Ecija province. PHOTOS BY MAURICE MALANES 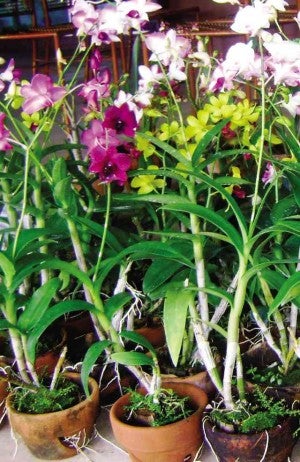 Each time she went on a trip to Bangkok in Thailand, she returned home with a few orchids to accent her family’s house in San Jose City, Nueva Ecija province. But every time she had at least a dozen, some neighbors and friends dropping by would beg her to part with some of her orchids, especially if they could not help but notice these abloom with flowers.

In no time, the entrepreneurial instinct in her gave her a new business idea: Why not sell orchids?

Thus began the orchid business of Jeverdalyne Pascual-Fungladda, a businesswoman who used to trade Bangkok-sourced RTW (ready-to-wear) and souvenir items to Filipino clients.

Her shift to orchids is turning out to be a wise decision, as the orchid industry is expected to be among the more competitive trades once the Asean Free Trade Area (Afta) goes into full swing in 2015.

“I really love orchids, as they relieve me from stress,” 61-year-old Fungladda said. “I found out that many feel the same way. I saw the potential and opportunity of this orchid business and I’m happy because it’s something I love.”

She began collecting orchids in 1987. Each time, she would go to Bangkok to buy RTW and souvenir items, such as brassware to sell in San Jose.

After she decided to shift her business to orchids, she started collecting orchid seedlings from Bangkok to propagate in their compound in San Jose.

She is fortunate, as her husband’s family owns a 40-hectare orchid farm in Nakhon Pathom province, 56 kilometers from Bangkok, which exports orchids to the Netherlands and other countries. So sourcing seedlings for her over a hectare backyard orchid farm in San Jose is no problem.

In 2004, she expanded her orchid farm after the family acquired an almost 4-hectare lot just a few blocks from their home in San Jose.

Now growing under greenhouses are 650,000 orchids of five varieties, including “waling waling,” which Filipino florists regard as the “Queen of Philippine Flowers.”

Common in southern Philippines, particularly Davao and Surigao provinces, waling waling (Vanda Sanderiana Reichenbach) was widely propagated and bred in Thailand, which is now acknowledged as the world’s orchid capital.

Ironically, the Thais learned how to breed orchids from Filipinos. Many Thai florists, horticulturists and agriculturalists got educated in Philippine schools, such as the University of the Philippines Los Baños and Mountain State Agricultural College (now Benguet State University) in La Trinidad town, Benguet province.

“When they returned home, these former Thai students applied and developed what they learned from here,” said Fungladda’s son Arthur.

He said his family maintained at least 10,000 waling waling orchids in their greenhouses. These are replenished monthly by new seedlings from the Fungladda family’s orchid farm in Thailand.

Waling waling is among those that sell fast, besides other Vanda orchid varieties, said Arthur, who quit his job as a lawyer in Bangkok to help attend to his mother’s orchid farm.

Fungladda’s farm sells waling waling to wholesale buyers at P550 to P1,500 per plant, depending on size and variety. Wholesale buyers come from as far as Dipolog and General Santos cities (both in Mindanao), and Bohol province in the Visayas. They buy at least P5,000 to P100,000 worth of orchids, which include waling waling and other orchid varieties, such as dendrobium, oncidium brassia, cattleya and other Vanda families.

During peak season, which starts from December to April, Fungladda’s orchid farm grosses an average of P750,000 weekly. She also expects more wholesale buyers during key tourism festivals and seasonal celebrations, such as Baguio’s Panagbenga Festival in February to March, Valentine’s Day, Santacruzan festivals in May, the wedding month of June, All Saints’ Day and Christmas.

Orchid retailer Romnick de Guzman is among Fungladda’s many regular customers. One Saturday, he bought at least P6,000 worth of flowering orchids, which he said he would retail at the public market in Santiago City, Isabela province.

The staff of Baguio Country Club last year bought around P40,000 worth of 400 cattleya and 900 other kinds of orchids, which they sought to propagate.

“They (staff) were surprised at our comparatively lower prices,” Fungladda said. She noted that some Baguio orchid growers were selling at P2,500 per plant what her farm would sell at P550 to P1,500.

“I wish that other people could afford to buy orchids, which could help relieve them from stress, too,” she said, citing the prohibitive price of other growers.

The farm employs 22 workers who individually check each orchid plant regularly. It used to employ more workers until it mechanized its watering task.

Fungladda invested at least P1.6 million on two deep wells and electric-powered water pumps. Each row of orchids is also installed with water sprinklers, which are switched on for five minutes, twice a day, particularly during the dry season.

Orchids are among the potential products that have a big market, even when the Afta is fully implemented in 2015, said Arthur.

Small wonder that, besides Thailand, other Asian countries are investing substantial resources on their research and development to improve their orchid industry.

In Vietnam, for example, some big farms are tapping biotechnology techniques to improve the orchid industry, as orchids are turning out to bring 20 times more profit than rice, according to the Vietnam News newspaper.

Although highly priced orchids, such as waling waling, originated from the Philippines, the country, compared to other Asian neighbors, has yet to fully develop its orchid industry.

Probably the biggest in Central Luzon, Fungladda’s orchid farm pales in comparison to the huge orchid farms in Thailand. Even if her farm combines with four other big orchid farms in the provinces of Bulacan, Batangas, Cavite and Quezon, the Philippines still has a long way to go in the orchid industry.

Still, Fungladda said, she dreams of making San Jose City the “orchid capital of the North.”