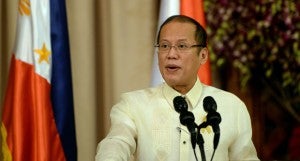 (We are open to the possibility that she just wants to muddle the story. While the number of people that we should investigate increases, our term has probably ended by the time we have completed the investigation. The case would no longer be filed. Maybe that is the strategy.)

Asked if he believed accusations that his appointed officials are involved in the misuse of public funds, Aquino said, “I need to see the evidence.”

The President pointed out that Budget Secretary Florencio “Butch” Abad, among those dragged into the pork barrel controversy, was the one spearheading reforms to have greater transparency in the government.

(If you are corrupt, you would want keep things hidden. But Secretary Abad has been opening up the processes of budget and expenditures.)

He also lauded the efforts of Agriculture Secretary Proceso Alcala, who denied involvement in the scam.

Aquino said some people are speculating that it is a feeble attempt by Napoles to shift the attention away from her.

(There are some who say she can’t defend herself that’s why what she does is to taint the reputation of others.)

(In the past, Mrs. Napoles was hated. Now when she speaks it’s as if people think she is telling the truth. How did that happen?)

Asked if he believed that there was someone else trying to control or exploit of the situation, he said, “I don’t have evidence right now. But I know personalities who are actively trying to muddle the issue.”

The President’s statement came a day after Napoles’ camp submitted to the Department of Justice a copy of her expanded affidavit and the list of lawmakers and government officials allegedly involved in the misuse of the Priority Development Assistance Fund (PDAF).

The President gave the interview at the Naval Station Carlito Cunanan in Puerto Princesa City, Palawan after the celebration of the Philippine Navy’s 116th anniversary.
RELATED STORIES