Another mother posts photos of newborn gagged with tape 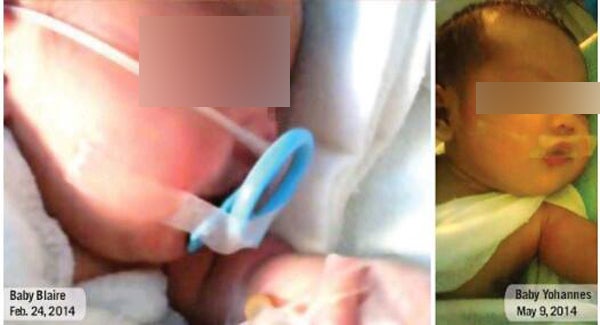 CEBU CITY, Philippines—Are there other taped babies out there?

A 22-year-old mother in Cebu City has posted photos of her newborn girl whose mouth was gagged with adhesive tape while sleeping in the nursery of the Cebu Puericulture and Maternity Center last February.

This time , the photos showed a blue pacifier in the baby’s mouth.

“I decided to post the photos because I was disappointed when I saw the news about the hospital’s denial during the hearing that this happened,” the mother told Cebu Daily News by phone.

CDN agreed to keep her name out of the story for now, but the mother’s identity is quickly spreading as her Facebook images are being shared online.

“My baby Blair was also taped during her stay at the Maternity (hospital). She was only 2 days old when the photo was taken,” said the mother’s post on Saturday.

“Their reason is para muhilom daw akong baby kay saba daw cgeg hilak (They said their reason is to keep my baby quiet because she was noisy and always crying),” she said.

“We did not complain about what happened at the time because I thought it was a normal practice or protocol in the hospital,” she said in an interview. Her suspicion it was not a standard practice was reinforced, she said, when she saw two to three other babies in the nursery that day with pacifiers also taped to their mouths.

The photos were images from a two-minute video she took in the nursery. She used four frames as a collage and posted them on Facebook for public viewing at 11:45 p.m. last Saturday.

The baby was born last February 22.

The revelation poses new difficulties for the hospital, which is under investigation by an inter-agency government panel for possible child abuse and violation of a policy on breastfeeding.

The hospital management has stood by their nurses’ denial of using tape or a pacifier on another baby on May 9, a complaint raised by parents Ryan Noval and his partner Janice Badocdoc who posted photos of their son baby Yohannes on Facebook, which went viral.

Hospital lawyer Cornelio Mercado Monday night confirmed that baby girl Blair was a  patient of the maternity hospital. He said the pacifier and an oxygen tube shown in the infant’s photo were necessary.

“As gathered, baby had a very fast respiratory rate hence the pediatrician put the oxygen (tube). The baby could not take milk so the pacifier was given,” he texted CDN. “It’s not the nurse (who had that placed there ).”

Today, the fact-finding hearing resumes at the Department of Health (DOH) where the two nurses on duty last May 9 and hospital administrators will again face questions from the inter-agency panel.

“There is nothing to hide,” said Mercado, the hospital’s lawyer and spokesman.

He said they are ready to give a copy of Closed-Circuit Television (CCTV) footage of cameras in the hospital (although no camera is stationed in the nursery itself) and their “child protection policy” which was requested by the pane.

Asked if he was satisfied with the first hearing last Friday, he replied, “That’s the sad part, we don’t know if there’s a pre-judgment already made.”

The mother of baby Blaire said her partner advised her not to file a case because they want to live in peace.

Asked what she would do if she’s summoned to testify by the panel or the court, she said that she still has to “decide” the matter with her partner.

After the photo collage went on line, angry netizens posted their comments.

A certain “Anton Von” commented and linked the item to Ryan Noval. Eight hours after, Noval urged the mother to take action.

“I hope you are more than willing to come forward with your incident at the Maternity,” he wrote.

“I am Ryan Noval and this is my son. They are trying to make us look crazy about our issue. Please help all the babies/ families become aware of their practice,” he said.

Lawyer Dante Jadman of Commission on Human Rights (CHR-7), who heads the panel, said that although the pacifier and the plaster can no longer be found, the complaint of the parents Noval and Badocdoc is still strong.

“It’s not weak. The narration of both parties last week can be strong evidence since they were made under oath,” Jadman said.

During the first hearing last week, nurse Arianne Mae Pacula said she saw the plaster on baby Yohannes face and the dislodged pacifier but had no idea how they got there.

She was confronted about the tape by the mother, Janice, but the nurse denied being the one who removed it as described by the mother.

The photos posted in Facebook were certified as authentic and not altered in any way.

CHR 7 Regional Director Arvin Odro said “The next thing that they can do is to undergo a lie detector test.”

The inter-agency panel is headed by CHR-7. Other members of the probe are heads of the Department of Health (DOH-7), Department of Social Welfare and Development (DSWD-7) , Women and Children Protection of Cebu City Police Office, National Telecommunications, National Bureau of Investigation, and Professional Regulation Commission.