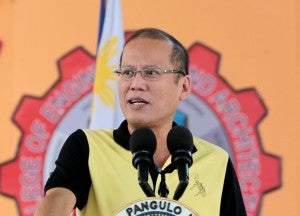 Vitangcol, who was relieved from his post on Monday, is being accused of rigging contract bids for the MRT.

He then explained that he did not know Vitangcol personally, despite being a presidential appointee.

Aquino explained that this is because he lets his secretaries choose the people they want to work with.

Vitangcol was appointed to the MRT administration in January 2012 when Interior Secretary Manuel “Mar” Roxas II was still the head of the Department of Transportation and Communications (DOTC).

“These latest appointments are in line with the department’s goal of infusing new blood and recruiting highly qualified executives to resolve the myriad policy and operational issues in our transport systems,” Roxas said at the time.

Vitangcol was touted then for his work on Public-Private Partnership (PPP) projects as director of the government’s PPP Center. His expertise as a lawyer included the realm of information technology.

Ferret out the truth

During the interview broadcasted over the radio, Aquino said he entrusted DOTC Secretary Joseph Emilio Abaya to investigate if there was indeed wrongdoing on the part of Vitangcol.

“I’m sure Secretary Abaya will take…upon discovery of this fact, will take all the necessary steps to ferret out the truth,” he said at the sidelines of the Philippine Navy’s 116th anniversary held at Naval Station Carlito Cunanan in Palawan.

Aquino said Abaya texted him Monday night, telling him that they discovered that Vitangcol had a relative in the company that received a contract for the supply of additional tracks and trains for the MRT.

“We are relieving MRT 3 GM Vitangcol and we’ll appoint LRTA Administrator Joy Chaneco in an acting capacity. We are investigating GM Vitangcol if he knew of the fact that a relative by affinity was a board member,” the text message read.

The President said that while he wanted to “fast forward” the investigation, there is a process that needs to be followed.

During a hearing at the House of Representatives earlier on Tuesday, Vitangcol said that he initially did not know that he was related by affinity to Arturo Soriano, one of the director-incorporators of PhilTrams, the company awarded with the MRT contract.

Soriano is the uncle of Vitangcol’s wife.

Vitangcol claimed that he told Soriano to divest his shares in the firm because of the conflict of interest. He said Soriano was no longer a part of the project when the contract was awarded to PhilTrams.

MRT chief: ‘I was relieved and I resigned’