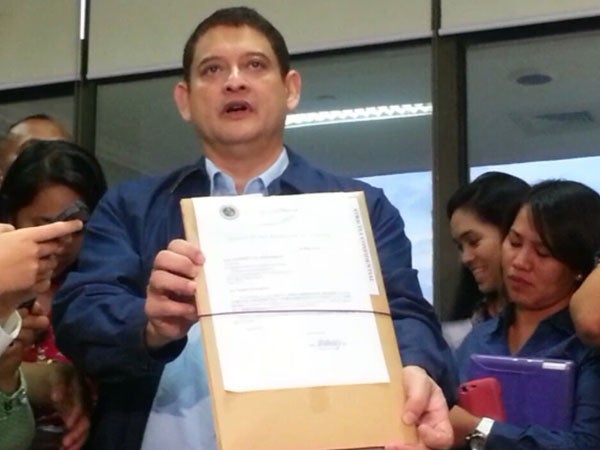 MANILA, Philippines—“As far as I can remember, in my present condition at Ospital ng Makati, the following are the senators, congressmen and agents, as well as officials and employees of implementing agencies who dealt with me and received portions of the pork barrel.”

Thus said Janet Lim-Napoles in her long-awaited 32-page affidavit submitted Monday afternoon to the Senate blue ribbon committee, in which she denied she was the mastermind of the P10-billion pork barrel scam and declared she learned the ropes from Budget Secretary Florencio Abad when he was a House member, and named 20 senators and 100 congressmen allegedly involved in her schemes to steal money meant to improve the nation’s impoverished countryside.

“I am not the mastermind of the pork barrel because I didn’t start this; this has long been practice or system,” she said. And neither is she “the most guilty,” she added, ostensibly to bolster her bid to become a state witness.

In fact, the agents of lawmakers were more knowledgeable of the scheme, Napoles said.

Specifically, the 51-year-old businesswoman said, it was through Abad, then the Batanes congressman, that she learned that she needed a nongovernment organization (NGO) or cooperative to be able to deal with the agencies in siphoning off allocations from the congressional Priority Development Assistance Fund (PDAF) into ghost projects and kickbacks.

“I need to see her affidavit before reacting. I have been hearing and reading about different versions of it. It is prudent that way,” Abad told the Inquirer when asked for comment.

In one affidavit, Napoles listed 12 incumbent senators, including Juan Ponce Enrile, Jinggoy Estrada and Ramon Revilla Jr. who are fighting indictment for plunder and graft before the Sandiganbayan over the scam.

An earlier Napoles list named 11 former and current senators among those who allegedly received kickbacks from her.

‘The truth will set you free’

Sen. Teofisto Guingona III, chair of the committee, last night released copies of Napoles’ two affidavits to the media, but said he had not read the contents.

“Let the document speak for itself,” he told reporters after announcing he was releasing copies to the media, the public and senators “in the spirit of transparency.”

By telling the truth, Napoles said she expected to step on the toes of many. “The truth hurts… but the truth will set you free,” she said on page one of her affidavit.

After months of prayer and reflection, Napoles said she wished to shed light on the pork scam and Malampaya Fund mess, referring to the P900 million she allegedly stole. The money was meant for victims of Storms “Ondoy” and “Pepeng” in 2009. She had been named in a complaint on the case involving the government share in the operation of natural gas wells off Palawan.

Napoles said she was hurt by charges naming her as the pork barrel queen and mastermind, and describing her as “most guilty,” “center of controversy” and “architect of the PDAF scam.”

The businesswoman is on a hospital furlough. She is under police custody for serious illegal detention—not the pork barrel scam—on a case filed by her former finance officer, Benhur Luy.

Luy’s hard disk drive, given to the Inquirer, named 25 senators and 138 representatives—former and current—among many people Napoles dealt with in her PDAF activities. All of the senators named in the Luy files are included in the expanded Napoles list, except for Sen. Francis Escudero. The latest Napoles list does not include Senators JV Ejercito, Franklin Drilon, Ralph Recto, Miriam Defensor-Santiago and former Sen. Ramon Revilla Sr. whose names appear in the Luy files.

Napoles named a certain Ruth “Allen” who helped her former aide Niel Tan in the House, and one Catherine Mae “Maya” Santos who guided her in transacting with the Department of Agriculture and the Senate.

Guingona, whose staff picked up copies of the affidavits from the Department of Justice, said he would await the submission of the Luy files before deciding when to resume the inquiry into the pork scam.

Justice Secretary Leila de Lima had twice asked for an extension for the submission of Napoles’ expanded affidavit. Her last deadline was Monday.

“I gave money for the campaign of Sen. Alan Peter Cayetano in the last election,” Napoles said in her affidavit, referring to the 2013 balloting. “We met at the SLICE restaurant at the Bonifacio Global City. I personally handed the money to him.”

Cayetano’s uncle, identified as “Tito Boy,” also acted as an agent for the then congressman Cayetano for a project to be implemented by the Department of Transportation and Communications, Napoles said.

“The project did not push through because we had a disagreement on the rebate. They were asking for a bigger rebate, that’s why they returned the money I had advanced to Tito Boy. When I got the money back, it wasn’t complete,” she said.

Napoles said she met Escudero at a Chinese restaurant at the Edsa Shangri-La Hotel before the elections in 2010 through Rep. Rodolfo “Ompong” Plaza.

“There I was convinced to financially support his plan to run for president. I gave him financial help that day,” she said.

They met again months after the 2010 elections at the Taste of LA restaurant in Quezon City. “We talked about the projects that he could give me. I handed him money again that afternoon, but no project pushed through,” she said.

She said she met Abad, through an agent named Manuel Jarmin, at the Japanese Restaurant at Edsa Shangri-La Plaza Hotel. There she said Abad explained the Saro, or special allotment release order, for PDAF allocations.

“When we talked about the implementation of a project, he asked me if I have an NGO or coop. I said I had none, and he said he’d take care of this. As far as I can remember, he used the Batanes Electric Cooperative to implement the project,” Napoles said.

Eventually, Abad returned the P4 million plus an additional P2 million, she said.

She then detailed how the scheme proceeded. She said the project got rolling with the issuance of the Saro to the agency’s finance department.

“It’s at the office of Ofelia Agawin where the authenticity of the Saro is confirmed. Once the accreditation of a foundation is approved… only then would Secretary [Proceso] Alcala sign,” she said.

When Alcala was not around, Assistant Secretary Allan Umali would sign the memorandum of agreement, as well as checks before these are transferred to the regional field units and local governments, she said.

“That is where we make deliveries,” she said.