Pope to Muslims, Jews: Let’s ‘work together’ for peace

JERUSALEM – Pope Francis called Monday for Christians, Jews and Muslims to “work together” for justice and peace on a visit to Jerusalem’s Al-Aqsa mosque compound, the third holiest site in Islam.

“May we work together for justice and peace,” he said at the sprawling plaza, which is also considered sacred by Jews because it was the site where their two Jewish Temples once stood.

As he toured the compound accompanied by the Grand Mufti of Jerusalem, Mohammed Hussein, he was surrounded by a large crowd of Catholic and Muslim officials, as Vatican security guards and Israeli police looked on.

Entering the exquisite blue-tiled Dome of the Rock with its landmark golden cupola, which is used as a place of worship for women only, the pope first removed his shoes.

He then walked down towards the smaller, silver-domed Al-Aqsa mosque – Arabic for the “furthest mosque” – which is considered the third holiest shrine within Islam because it is the site where Muslims believe the Prophet Mohammed ascended to heaven. 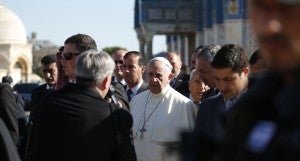 Pope Francis (C) arrives at the Dome of the Rock in the al-Aqsa mosque compound, in Israeli annexed East Jerusalem on May 26, 2014. Pope Francis faces a diplomatic high-wire act as he visits sacred Muslim and Jewish sites in Jerusalem on the final day of his Middle East tour. AFP

Located at the southeastern edge of the Old City, the compound is known to Muslims as Haram al-Sharif or the Noble Sanctuary, and to Jews as the Temple Mount.

For Jews, it is the holiest site in Judaism but they are forbidden by law to pray there, praying instead at the adjacent Western Wall, the last remnant of the retaining wall that supported the second Temple complex.

It is currently the holiest site at which Jews can pray and was also to be visited by the pope immediately after his tour of Al-Aqsa.