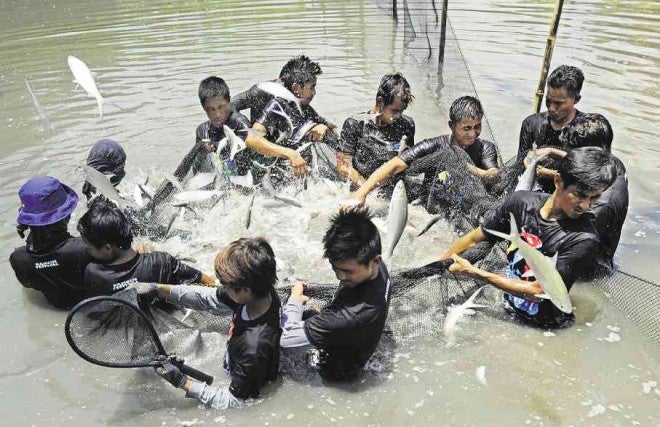 Dagupan milkfish will soon bear tail tags, part of a branding process to distinguish the produce from other “bangus” products harvested in other parts of Pangasinan province and the Ilocos Region. EV ESPIRITU/ INQUIRER NORTHERN LUZON

DAGUPAN CITY, Philippines—It will soon be a lot easier for consumers to determine if the “bangus” (milkfish) they are buying are authentic Dagupan brand or not.

Bangus grown in this city will carry “tail tags” to distinguish it from milkfish grown in other areas, Mayor Belen Fernandez said.

She said a bangus development team she had created would take charge of the branding and marketing of bangus.

“From here on, only franchised retailers in Dagupan and Metro Manila will be selling the world’s tastiest bangus … to ensure that Dagupan bangus lovers are buying the real ones,” Fernandez said during her recent state of the city address.

This city raises bangus in ponds and produces about 17 percent of Pangasinan province’s total daily production of 16.5 metric tons. The bulk of the bangus production comes from pens and cages in the towns of Binmaley, Sual, Bolinao and Anda.

But the bangus that made this city popular has prompted some enterprising but unscrupulous traders here and in Metro Manila to pass off their produce as “Dagupan bangus.”

In an earlier interview, Nestor Domenden, Bureau of Fisheries and Aquatic Resources regional director in the Ilocos, said Dagupan bangus were being marketed as the “best-tasting bangus in the world,” primarily because of the water quality in the city.

Domenden said the Dagupan City government was the only local government that had shown interest in branding its fish product.

He said the branding program would hopefully stop the practice of marketing bangus stocks from other provinces as coming from Pangasinan.

“This practice makes it look like all bangus being sold in Luzon come from Pangasinan,” Domenden said.

In March, Fernandez implemented a schedule of selling bangus in the city’s fish market.

Under the schedule, bangus harvested from fish farms in western Pangasinan towns can be sold here only from Sundays to Thursdays. Only bangus produced in the city are sold every day.

Emma Molina, city agriculturist, said that in any day, at least 10 MT of bangus were traded in Dagupan’s fish market, with about 4 MT of these grown here. These are then bought by traders and sold in other places such as Baguio City and Metro Manila and in provinces in Cagayan Valley region.—Gabriel Cardinoza