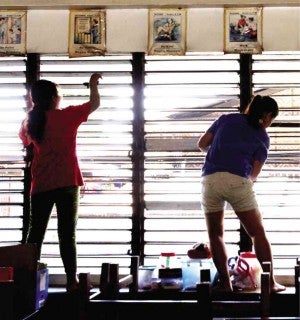 SAN FRANCISCO, Agusan del Sur—Manong Ondo (full name withheld upon request), 64, who tends a small rice farm, is at a loss how and where to find money to pay for the compulsory “donation”for Brigada Eskwelaat Agusan del Sur National High School (ASNHS).

Manong Ondo has to raise the money so that his son would be allowed to enroll this school year.

Brigada Eskwela is supposed to be a volunteerism program of the Department of Education (DepEd). Parents help students render services to their schools, such as cleaning or doing repair jobs, prior to the opening of classes.

This was what Mang Ondo could not understand. If volunteerism was the concept of Brigada Eskwela, then why does he have to pay?

Pitying his father, the son offered to find ways to produce P250, the smallest amount that school officials would accept.

“I think I have to pluck leftover stalks at the rice field because they may still have palay I could collect and sell,” Mang Ondo recalled his son telling him.

On the campus of ASNHS, a classroom was assigned for cleaning by those registering for Brigada Eskwela. At the entrance, a computer printout of “Brigada Donation Packages” is prominently displayed.

The notice lists packages of donations that parents can choose.

If one chooses Package A, he has to bring a gallon of paint or pay the equivalent cash price of P535.

Package B requires parents to bring corrugated GI sheet worth P238 and one-fourth kilogram of umbrella nails costing P18.75 or a total of P256.75.

Package C lists four pieces of lumber measuring 2 by 2 by 10 feet costing P224 plus a half kilogram of common nails worth P29 or a total of P253.

Package D lists a sack of cement worth P250.

Teodoro Plaza, principal of ASNHS, said the itemized package rate of Brigada Eskwela had been agreed upon by all public schools in the province during a meeting and orientation of school coordinators at the division office of the DepEd last month.

“We are implementing the standard requirement of Brigada Eskwela,”Plaza said as he tried to point out that ASNHS had been consistently cited for its accomplishments under the program.

He said the package donation scheme had the blessing of the DepEd central office.—Chris Panganiban