Bring Napoles back to Senate–Cayetano 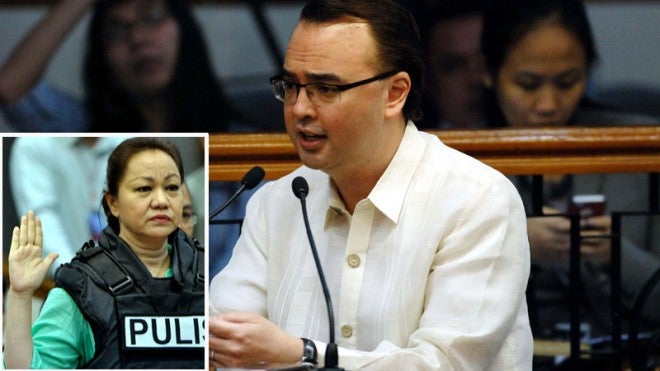 Senate Majority Leader Alan Peter Cayetano on Sunday demanded that Janet Lim-Napoles (inset) be brought to the chamber’s blue ribbon committee to testify on the contents of an extended affidavit elaborating on the alleged P10-billion pork barrel scam that Justice Secretary Leila de Lima was scheduled to turn in Monday. INQUIRER FILE PHOTOS

MANILA, Philippines—Senate Majority Leader Alan Peter Cayetano on Sunday demanded that Janet Lim-Napoles be brought to the chamber’s blue ribbon committee to testify on the contents of an extended affidavit elaborating on the alleged P10-billion pork barrel scam that Justice Secretary Leila de Lima was scheduled to turn in Monday.

In a telephone interview, Cayetano said he was “in favor of immediately releasing” the document, warning that keeping it a secret would only “empower Napoles to manipulate public opinion one way or the other.”

“But I’m also in favor of a face-to-face, professionally handled hearing” that would allow Napoles to “stand up to her affidavit,” the senator said.

Cayetano said such a hearing should include Napoles’ husband Jimmy, De Lima, Benhur Luy and the other whistle-blowers, and Secretary Panfilo Lacson, who earlier submitted Napoles’ unsigned affidavit to the  committee headed by Sen. Teofisto Guingona III.

“Why allow Mrs. Napoles to pollute the people’s minds one way or the other if she won’t appear in the Senate hearing anyway, or if there won’t be any mechanism in place to know if [her revelations] are true or not,” he argued.

“The problem now is that roles have been reversed: it’s the accused who now have to do the explaining, not Mrs. Napoles.”

Guingona released a draft report on April 1 on 10 hearings the committee had conducted on allegations that P10 billion in congressional allocations from the graft-ridden Priority Development Assistance Fund (PDAF) was diverted to ghost projects and kickbacks through nongovernment organizations controlled by Napoles.

The draft report recommended that Senators Juan Ponce Enrile, Jinggoy Estrada and Bong Revilla be prosecuted for plunder in connection with the misuse of the lawmakers’ PDAF, a pork barrel intended to ease rural poverty. The three senators have denied wrongdoing.

Guingona has not announced a decision whether he would reconvene the committee.

De Lima will submit Monday the extended affidavit of Napoles supposedly detailing the involvement of many other officials in the pork barrel scam, in addition to those whose names had already been made public. She earlier released a list of lawmakers involved in the scam that was given to her during a five-hour “tell-all” meeting on April 22 at Ospital ng Makati.

The 51-year-old Napoles, who is detained on charges of serious illegal detention filed by Luy, is undergoing hospital treatment after having her cancerous uterus removed.

Cayetano on Sunday cautioned the government against entering into a deal with Napoles, who has expressed her desire to be granted immunity in exchange for turning state witness.

“I am 100 percent against any deal with Napoles or her family, especially since the government keeps saying it already has an airtight case,” he told the Inquirer.

Cayetano cited reports that the government was exploring the idea of granting immunity, at least, for Napoles’ family in exchange for her testimony in the pork barrel case.

“If it’s true that there’s some sort of immunity that might be given to her family, the agreement should be that if she tells a lie or she doesn’t tell the whole truth, the whole deal is off,” he said.

Last November, Napoles told the committee she knew nothing about the PDAF scam.

De Lima has twice asked for more time to submit Napoles’ extended affidavit, citing the medical condition of the businesswoman, who remained confined at Ospital ng Makati due to vaginal bleeding.

It also named two former senators, Manny Villar and the late Robert Barbers, and more than 70 members of the House of Representatives.

The list is similar to the one earlier submitted to the committee by Lacson, which Guingona subsequently made public.