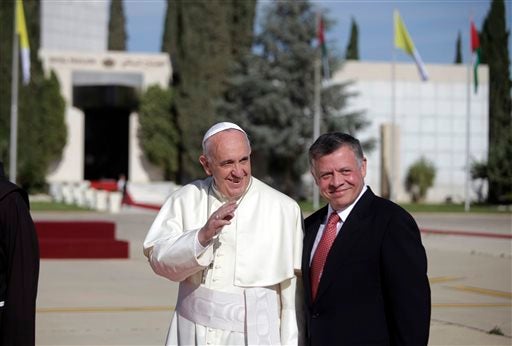 Pope Francis, left, waves to the press accompanied by King Abdullah II of Jordan, as he leaves Amman, Jordan, Sunday, May 25, 2014. AP

JERUSALEM – Jerusalem police arrested 26 Jewish extremists protesting Sunday at a holy site on Mount Zion outside the Old City that will be visited by Pope Francis, a spokesman said.

“Demonstrators at King David’s Tomb threw stones and bottles at the security forces, lightly injuring two police,” spokesman Micky Rosenfeld said, referring to a site revered as holy by Christians, Jews and Muslims where the pope will celebrate mass on Monday.

“Among those arrested was a soldier who threatened a police officer with his weapon when one of his friends was arrested,” he added, saying some of them had broken into the room where the ancient sarcophagus is located before being evacuated.

Israeli public radio said 150 extremists had gathered to denounce the pope’s upcoming visit and were chanting slogans against the atrocities committed by the church against Jews during the Crusades and the Inquisition.

The upper floor of the building where the tomb is located is known to Christians as the Cenacle, the place where Jesus ate the Last Supper and where his followers were baptized by the Holy Spirit at Pentecost.

Under Israeli law, Christians are only permitted to pray there twice a year, and plans for the pope to celebrate mass there have prompted weeks of protest and several incidents of anti-Christian vandalism.

Pope to meet clergy at site of historic rivalry

Read Next
2 Israelis killed at Brussels museum
EDITORS' PICK
Unleash the photographer in you this World Photography Day with vivo smartphones
Palace warns sugar hoarders after raid on Pampanga warehouse
Look Through: The fate of impounded stray dogs
What to watch out for when selecting a video surveillance solution
House energy committee chair Arroyo bats for cheap electricity
Metro Manila’s COVID-19 cases on downward trend, but surge not over — OCTA
MOST READ
LOOK: Miel Pangilinan dazzles in glittery pre-debut shoot
Man abducted in Batangas gasoline station, found dead in Quezon
August 19 a special non-working holiday in Quezon City
Palace warns sugar hoarders after raid on Pampanga warehouse
Don't miss out on the latest news and information.