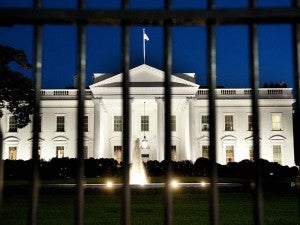 WASHINGTON—US Secret Service personnel sprang into action Friday outside the White House when a man stripped naked in what appeared to be a bizarre form of protest.

On one of the hottest days of the year so far in the US capital, where temperatures hit at least 26 degrees Celsius (78 Fahrenheit), the man ambled up to Secret Service officers at the gate of the White House and then took off all his clothes.

The incident happened shortly before President Barack Obama was due to give a speech at the White House announcing his new pick for housing secretary.

The man, named by the Secret Service as Michel Bechard, refused to be subdued and was duly arrested, a spokesman said.

Witnesses said uniformed officers covered the man in a foil heat sheet and loaded him into a Secret Service van.

Photos on Twitter showed at least three police officers kneeling on the naked man to keep him under control. Another image showed the man standing just a few steps from the White House fence as people stood around and snapped pictures with their camera phones.