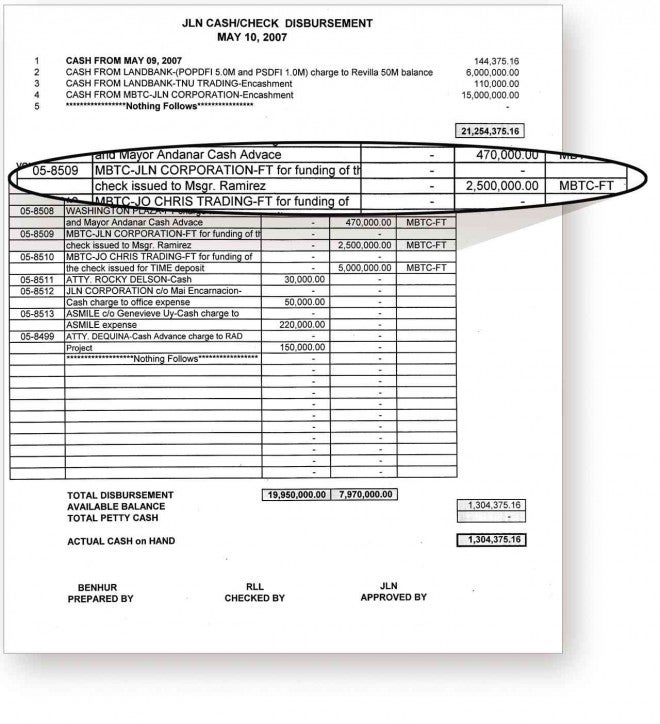 MANILA, Philippines—Former Quiapo Church rector Msgr. Josefino Ramirez on Thursday admitted that he received donations from alleged pork barrel scam mastermind Janet Lim-Napoles, but stressed that he received the donations “in utmost good faith and without any knowledge as to the source of the funds.”

In a statement sent to the Inquirer through the office of the Archdiocese of Manila, Ramirez said that as a coordinator for Divine Mercy in Asia, he received the donations of the Magdalena Luy Lim Foundation, which Napoles established in memory of her mother, and from other donors “with the sole intention of using the same for the projects of the Divine Mercy.”

According to Ramirez, Napoles’ mother was an ardent devotee of the Divine Mercy.

“She used to help my charities since 2004, most especially the apostolate for China because this is the only way that she can thank the Lord for the gift of her Catholic faith as a Chinese. Before she died, Magdalena Luy Lim requested her children to continue helping the apostolate projects of the Divine Mercy in the Philippines and in China, through the foundation,” Ramirez said.

“Hence, donations were made by the Magdalena Luy Lim Foundation for the various projects of the Divine Mercy in the Philippines and in China,” he added.

The Inquirer reported Thursday information from Benhur Luy’s files that Napoles gave generous donations to priests and nuns, using money from her alleged raids on the Priority Development Assistance Fund (PDAF) in connivance with senators and members of the House of Representatives over a period of 10 years up to 2012.

Luy’s entry for May 10, 2007, under cash and check disbursements of Napoles’ JLN Corp., showed that a Metrobank check for P2.5 million was issued to Ramirez.

In his statement, Ramirez said the amount was only P2 million, not P2.5 million, and was donated by Napoles to the Caritas Salve Savings and Livelihood with Values Education Credit, a microfinance program under Caritas Manila.

Ramirez also admitted that Napoles donated P434,451 (as recorded in Luy’s entry for Oct. 16, 2008) for his airplane ticket and the plane tickets of four Chinese priests representing China to the World Apostolate Congress of Mercy in Rome. Ramirez said he attended the congress as coordinator of Divine Mercy for Asia.

Another entry in Luy’s files showed that Ramirez, who retired two years ago, received donations amounting to P800,000 from Napoles on several occasions.

Ramirez explained that the amount was spent for various expenses incurred by 14 batches of Chinese priests and nuns taking Church renewal courses in the Philippines from December 2011 to August 2013.

He said the money was spent for food, amounting to P57,143 a month for each batch consisting of 20 priests and nuns; honoraria  for lecturers, and electricity and water bills.

Ramirez also admitted that the Napoles family hosted a surprise birthday party for him and invited about 300 friends and former parishioners as guests.

“I have no knowledge of the exact amount spent for the said party,” he said.

According to Luy’s records, Napoles spent P310,550 for the priest’s birthday party, and another P9,000 for “guard of Monsi for Jollibee.” “Monsi” is Ramirez’s nickname within Napoles’ circle of friends.

“Food/meals from Jollibee were purchased by the host for the drivers of the guests who attended the party. I have no knowledge of the exact amount spent for the said foods/meals for the drivers,” Ramirez added.

“Since I met Ms. Napoles only in 2007, I can only attest to the fact that from 2007 to 2010, stipends were given to priests and nuns invited during special occasions, such as office anniversaries, the funeral Mass of Mrs. Magdalena Luy Lim, her death anniversary and other memorable occasions,” Ramirez said.

“The priests, who were friends of the Napoles family, and nuns were invited from various provinces and congregations. They were given stipends for their charities and transportation,” he added.

Luy’s files also named more than 100 members of the House of Representatives as having dealings with Napoles.

In recent days, many of them have denied having done business with Napoles or Luy.

On Thursday, more denied even knowing Napoles or Luy.

Iloilo Rep. Nathaniel Tupas described as “malicious” and a “blatant lie” his listing in Luy’s files, and demanded copies of documents supposedly linking him to the pork barrel scandal so he could bring legal action against the people responsible for “besmirching” his name.

“I never had any transaction with Luy, his former boss or any of the nongovernment organizations that they represent, or with any of their officers, agents, representatives, or employees,” Tupas said in a statement sent to the Inquirer.

“I never had and will never have any participation in any racket or scam whatsoever,” he said.

Tupas said the entry referring to him stated that the supposed transaction was “without Saro” (special allocation release order), proving that he had no dealings or transactions with Napoles or any of her NGOs.

He said the list served no purpose but to besmirch his reputation without any basis.

Tupas also said he did not know what the Luy files were about and that he never prepared any “list of proponents.”

“False and malicious accusations and claims, especially of this gravity, should not go unpunished. Those responsible must be held accountable for their lies,” he said.

“It is not fair to their victims,” he added.

Rep. Benhur Salimbangon of the 4th District of Cebu denied that he recommended pork barrel funding for a road project in Consolacion town.

He said Consolacion was part of the 6th District, not of the 4th District that he represents in the House.

Salimbangon stressed that the Department of Budget and Management does not allow congressmen to implement projects not within their districts.

He also said that funds released from his PDAF allocation went through Commission on Audit review.

Releases from his PDAF allocation went to projects in his district and “not a single centavo” went to any NGO identified with Napoles, he said.

Northern Samar 2nd District Rep. Emil Ong, a former National Food Authority administrator, said he was surprised that his name appeared in Luy’s files when he was never mentioned in Luy’s testimony to the Senate blue ribbon committee.

Ong said his sentiments were the same as President Aquino’s, referring to the Chief Executive’s recent statement about leaving the pork barrel scam to the investigators to resolve.

Mercado, now the governor of Southern Leyte, said in a text message: “I deny in strongest terms any insinuation of involvement in the use of the PDAF and shall await and welcome any investigation to ventilate my noninvolvement.”

Former House Deputy Speaker Abdulgani “Gerry” Salapuddin, who has been in hiding after being implicated in an explosion at the House in 2004, said he was “not only surprised but also shocked” at the mention of his name in Luy’s files.

Salapuddin, who was Basilan representative from 1998 to 2007, said by phone that he did not know Napoles or ever met her or Luy in his nine years in the House.

He said he was sure he did nothing wrong, as Luy’s files showed there was no Saro for the project attributed to him.

“How can there be any release of government funds without Saro? If there is no Saro, there is no NCA (notice of cash allocation),” Salapuddin said.—With reports from Cynthia D. Balana in Manila; Jani Arnaiz and Carmel Loise Matus, Inquirer Visayas; and Julie Alipala, Inquirer Mindanao