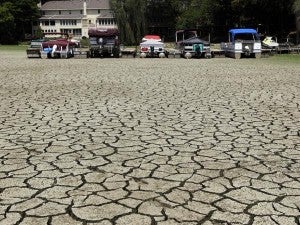 ZAMBOANGA CITY, Philippines—Zamboanga Archbishop Romulo dela Cruz has urged the people to pray more as the country will be facing typhoons as well as periods of drought brought by the El Niño phenomenon in 2014.

“Maybe the people need to pray more instead of declaring an Oratio Imperata because already the Pagasa (Philippine Atmospheric, Geophysical, and Astronomical Services Administration) said there will be as many typhoons this year,” Dela Cruz said.

The city is 44th on the list of areas expected to be hit by the prolonged dry spell.

But the state weather bureau said while it expected the El Niño to make its presence felt starting in June, stronger storms that could bring rains to various areas of the country would also occur toward the end of the year.

“However, El Niño causes the behavior of tropical cyclones to become erratic, affecting its tracks and intensity. The tropical cyclone tracks are expected to shift northward and its intensity could become stronger,” Pagasa said in an earlier advisory.

El Niño is characterized by unusually warm ocean surface temperatures in the central and eastern equatorial Pacific (CEEP), according to Pagasa.

This early, the agency said that it already noted a significant increase in sea surface temperature from 0.2 to 0.4 Celsius between April 21 and April 28 alone.

Pagasa said El Niño could persist up to the first quarter of 2015.

The recital of Oratio Imperata was the subject of a circular issued by Catholic Bishops of the Philippines (CBCP) President and Lingayen-Dagupan Archbishop Socrates Villegas.

In his circular issued early this month, Villegas urged dioceses to say the obligatory prayer from May 15 to September 29.

However, Dela Cruz urged Catholics to take the initiative of praying more as the El Niño would spawn not only months of droughts but days of stronger cyclones.

Oratio Imperata is defined as “a set of Roman Catholic invocative prayers consisting of a liturgical action and a short, general prayer which the local ordinary or prelate of the church may publicly pray when a grave need or calamity occurs.”

It is primarily decreed against natural calamities. The prayers are recited after communion or after the conclusion of the Holy Mass.

But the approval to recite the Oratio Imperata was known to be difficult to obtain on a diocesan level. In most cases, it should be demanded by a large number of Catholics.

Bayan Muna Partylist Representative Neri Colmenares said El Niño, being “quasi-seasonal in nature,” … “has been foreseen long before it happens.”

He said the government should have prepared for it long ago by formulating plans for irrigation, crop planting decisions, seed selection, and fertilizer application to mitigate the impact of the drought.

Colmenares said in an emailed statement that the government’s normal stop gap measures to address El Niño, including “expensive” cloud seeding and rice importation, as “very myopic” and “should be changed.”

“Instead, the government needs to build a strong agricultural base that would start from planting to post-harvest facilities, including rehabilitated irrigation system,” he said.