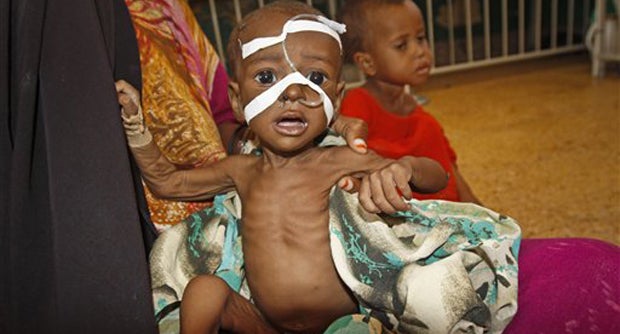 Mohamed Aden, a malnourished two-year-old boy, sits on his mother’s lap at Banadir hospital in Mogadishu, Somalia Tuesday, May 20, 2014. Much of Somalia has seen no or erratic rains in recent months and fighting between African Union forces and the Islamic extremists of al-Shabab is cutting off food shipments to many parts of the country and discouraging farmers from planting – as a result, 50,000 children are severely malnourished, says the aid community. AP

MOGADISHU, Somalia—Two-year-old Mohamed Aden has sunken eyes and protruding ribs. A picture of living hunger, Mohamed’s fragile posture has been seen many times in Somalia’s recent past, and doctors and aid leaders fear the child could be the forefront of a new wave of mass starvation.

Two Somali children died of malnourishment last week, said doctors at Mogadishu’s Banadir Hospital. A lack of food in many parts of the country could lead to many more such deaths, according to the U.N.

Much of Somalia has seen no or erratic rains in recent months. Fighting between African Union forces and the Islamic extremists of al-Shabab is cutting off food shipments to many parts of the country and discouraging farmers from planting. As a result, 50,000 children are severely malnourished, says the aid community.

The troubling situation may sound familiar. A crushing famine hit Somalia only three years ago, killing an estimated 260,000 people. The same conditions are now in place for a repeat of those dreadful scenes of hunger, aid workers say.

The U.N.’s top humanitarian official for Somalia is pleading for more money. Philippe Lazzarini says food distribution programs will soon be shut down because only 17 percent of the U.N.’s requested aid of $940 million has been given.

“This situation has troubling, troubling similarities with the situation that prevailed before the famine in 2011,” Lazzarini told a news conference in Nairobi, Kenya on Monday. “There is ongoing conflict. We have a drought. The funding has shrunk. We have today a series of early warnings telling us if no due attention is given we take the risk of turning back to a situation which prevailed only two years ago.”

More than 1 million people live as internally displaced refugees in Somalia. One in five children dies before reaching the age of five.

“He’s very fragile. We had to travel to here to get him treated,” said Haji, who traveled from Walaweyn, 90 kilometers (55 miles) north of the Somali capital. “There was no hospital, food or medicine. Life was very tough back home.”

The U.N.’s Lazzarini appealed for international donors to find $60 million so aid groups can continue feeding the malnourished children, and so aid can be transported into less accessible areas, a reference to territory controlled by al-Shabab rebels. UNICEF is on the verge of cutting health services for more than 2 million people, he said.

“What we have for Somalia today is half of what we had at this time last year,” he said.

Lazzarini outlined three main reasons why aid groups have been reduced to pleading for money only three years after famine. First, he said, there is an aversion to providing funds for south-central Somalia, where al-Qaida-linked militants controls large chunks of territory.

Second, there are competing crises in Syria, South Sudan and Central African Republic. But government aid budgets have not increased alongside those increasing needs. Third, he said, the security agenda in Somalia is taking priority over the humanitarian agenda.

The arrivals to Banadir Hospital create a somber mood in the corridors as nurses move children on stretchers from room to room.

“I brought my elderly, malnourished mother and my 4-year-old,” says Habiba Muhyadin, a mother of six who traveled from Elbur, in central Somalia. “Farms were dry. We had no food and we spent days in the bush before coming here.”

The trickle of destitute women with young, malnourished children strapped to their backs arriving at Banadir Hospital, worries the medics.

“There’s no funding, medicine or even paid staff here,” said Lul Mohamed, a doctor. “The challenges are much harder than before, as we are facing an influx of malnourished patients coming for treatment … The worst thing we see is that patients do come here frail and in some cases in a coma. Most of them fled from the regions with no food to eat.”