You want married priests? Give more 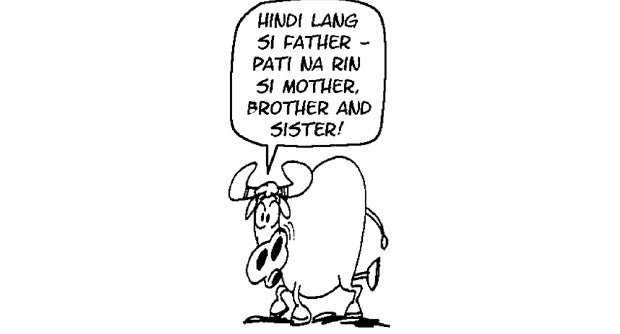 MANILA, Philippines—If you want your priests to be allowed to marry and have their own families, then be prepared to be extra-generous with your Mass collections.

Archbishop Emeritus Oscar Cruz, the judicial vicar of the Catholic Bishops’ Conference of the Philippines-National Appellate Matrimonial Tribunal (CBCP-NAMT), on Tuesday said priestly celibacy did not only have a theological premise but also a practical appeal to the ordinary flock.

“Don’t allow your priests to get married. Why? Because then the people will not only support the priest but they will also have to support the wife, the children, the grandchildren of the priest, and that is very expensive,” Cruz told reporters.

The daily basic needs of priests are usually supported by funds from collections made during Holy Masses. “If the priest is celibate, he is the only one the faithful are bound to maintain,” he said.

Cruz gave his insight following reports that 26 women who said they were in love with Roman Catholic priests had written Pope Francis urging him to make celibacy optional.

‘Norms should be updated’

On a more serious note, Cruz said he was hopeful the appeal made by the women from Italy would inspire Pope Francis to update the Church’s decades-old priestly formation program.

“I admire the women who wrote to the Holy Father. It was a candid expression of their option but it will not happen. The celibacy (among priests) will continue to hold,” he said.

“(But) I hope the Pope will be able, in due time, to set some norms on the formation of priests in the seminary. It’s about time it should be updated according to the signs of the times today,” Cruz said.

He said that in the Philippines, the priestly formation program was “too focused” on academics. He suggested that the program must also give emphasis on human values which will, in part, teach seminarians how to deal with girls they encounter.

“There is too much academic formation. (There must be) emphasis on human values, courtesy, respect, good manners and right conduct,” said the prelate, once the head of the CBCP Episcopal Commission on Seminaries.

“We lack that specially human formation on how a seminarian should deal with girls,” Cruz said. “Should they run away from them or should they embrace them? How should (they) react if (they) see girls?”

Cruz said that based on records from the NAMT’s dispensation and dismissal section, there were more cases of Filipino priests violating their vows of celibacy for having relationships with women than for being pedophiles.

“There are very few cases of (the latter) because, by tradition and custom, we are more macho than anything else,” said Cruz.

Supporters of the proposal to make celibacy optional in the Roman Catholic Church said allowing priests to marry would ease the shortage of priests in many areas.

But Cruz said this wasn’t entirely true, saying that the Eastern Rite Church—which allows their priests but not their bishops to marry—was also having problems drawing young men to priesthood.

He also pointed out that priests of the Latin-rite Roman Catholic Church, who were celibate, helped the Church grow as they could be sent across the globe as missionaries.

“They are the ones who spread the Church all over the globe. If priests are married, they cannot just be sent anywhere,” Cruz said.

Read Next
Pork list riles lawmakers but won’t probe themselves
EDITORS' PICK
Geek out at TOYCON 2022 powered by Smart Signature
Unemployment rate up to 6% in May
Bye bye Boris: UK PM Johnson bows out with regrets but no apologies
House energy committee chair Arroyo bats for cheap electricity
High inflation: Your P1 is now worth only 87 centavos
High-risk pregnancy: Reducing your risk is in your hands
MOST READ
Suspect in grisly killing of missing woman in Bulacan arrested
Rafael Nadal suffers ‘seven millimeter’ tear to abdomen–report
FDA probes popular Filipino noodle brand for ‘high level of ethylene oxide’
Kim Atienza’s daughter flaunts bikini body in response to critics of her ‘revealing photos’
Don't miss out on the latest news and information.