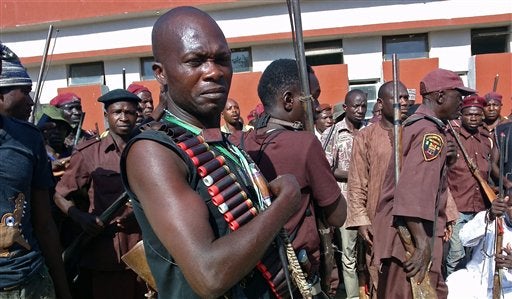 In this photo taken on, Sunday, May 18, 2014, armed hunters gather before looking for around 300 abducted school girls in Maiduguri, Nigeria. Hundreds of hunters armed with homemade rifles, poisoned arrows and amulets say their spiritual powers can lead them to the nearly 300 schoolgirls abducted by Islamic extremists. AP

MAIDUGURI, Nigeria— Traditional hunters armed with homemade guns, poisoned spears and amulets have gathered in their hundreds, eager to use their skills and what they believe to be supernatural powers to help find nearly 300 schoolgirls abducted by Islamic extremists.

Some 500 hunters, some as young as 18 and some in their 80s, say they have been specially selected by their peers for their spiritual hunting skills and have been waiting for two weeks in Maiduguri, the Borno state capital and the birthplace of Boko Haram, to get backing from the military and get moving.

With Nigeria’s military accused by many citizens of not doing enough to rescue the girls, the hunters demonstrated their skills to an Associated Press reporter on Sunday. Cow horn trumpets echoed eerie war cries from the screaming and chanting men as they twirled knives and swords with dexterity, occasionally stabbing and cutting themselves with no apparent harm. The hunters claimed their magic charms prevented any blood being drawn. They also trust amulets of herbs and other substances wrapped in leather pouches as well as cowrie shells, animal teeth and leather bracelets to protect them from bullets.

The appearance of the hunters from three northeastern states underscores how deeply the April 15 mass kidnapping — and the government’s apparent lack of action — has affected Nigerian society. It has spawned demonstrations and a tidal wave of commentary in media including social sites like Twitter and Facebook.

A spokesman for the hunters stopped short of actually criticizing the military.

A military spokesman did not immediately respond to an emailed question from AP on whether it would take advantage of the hunters’ local knowledge.

In contrast to the age-old stalking and tracking skills offered by the hunters, U.S. aircraft and camera-carrying drones are searching for the girls. Military teams from America, Britain, France, Spain and Israel with expertise in surveillance, intelligence gathering, counterterrorism and hostage negotiation are also present.

Police say more than 300 girls and young women were kidnapped from a boarding school in the remote northeastern town of Chibok, in Borno state and about 130 kilometers (80 miles) south of Maiduguri, on April 15. A total of 53 escaped and an estimated 276 remain in captivity, according to the police.

They were driven into the nearby Sambisa Forest, according to witnesses. Unverified reports from two federal senators from the region and Chibok residents quoting villagers in the forest and elsewhere indicated some of the girls may have been forced to marry their abductors and some may have been taken across the border into Cameroon.

Nigeria’s military insists that it is diligently searching for the girls and says near-daily aerial bombardments of the forest that began in mid-January were stopped to avoid accidentally hitting the girls.

“Our troops are out there combing the forests and all other possible locations searching for our fellow citizens. International support is also there assisting the process,” Mike Omeri, a government spokesman, said Friday.

Some parents of the abducted girls say villagers in the Sambisa Forest tell them they haven’t seen a uniformed soldier in the forest.

Pogu Bitrus, a Chibok community leader, said the savannah type openness of most of Sambisa, a national game reserve, should make it easy to survey from the air, though the extremists are believed to have camps in densely forested parts. The insurgents recently bombed the only bridge linking Borno state to Cameroon and Chad, where they have hideouts in mountain caves and another forested game reserve.

Leaders from Nigeria’s neighboring countries including Benin met at a French-organized summit this weekend in Paris to coordinate curtailing the insurgency that threatens the region. British, U.S. and European officials also attended.

Meanwhile, the hunters say they are reaching the end of their patience.

“We are seasoned hunters, the bush is our culture and we have the powers that defy guns and knives; we are real men of courage, we trust in Allah for protection, but we are not afraid of Boko Haram,” said one elderly hunter, Baban Kano. “If government is ready to support us, then we can bring back the girls. But if they are not, they should tell us so that we can disband and return to our homes and family.”

Nearly 30 US personnel aiding in Nigeria search for kidnapped girls