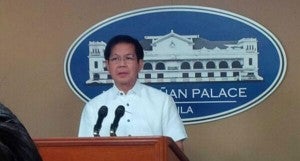 President Benigno Aquino III on Monday admitted that he once asked Lacson a similar question.

(In one text exchange between us, I said, ‘Ping, why is it that it is the Napoles list that is usually attributed to your name?)

The President said Lacson explained to him that there were times when he would be invited to talk about rehabilitation efforts but in the end will be asked about Napoles’ list.

In fact, in one press conference supposedly devoted to “Yolanda,” his work as rehabilitation czar was never discussed, the journalists choosing instead to focus on the pork barrel scam.

(Is he the one concentrating on Napoles or it is the media focused on the issues pertaining to Napoles?)

Nevertheless, the President expressed satisfaction in Lacson’s work as Presidential Assistant for Rehabilitation and Recovery (PARR).

(Am I satisfied with his work? So far, yes.)

However, he said it didn’t mean that Lacson and others involved in the rehabilitation of areas devastated by Super Typhoon “Yolanda” should be complacent.

(I always push everyone (to do better), that what you are doing may be good but we can still do better at a quicker pace.)

Among the topics discussed by Aquino and Lacson during their meeting last Friday was the acquisition of 1,400 hectares of land to house 200,000 families. It should be able to accommodate 150 housing units per hectare, he said.

Aquino said they are still looking for a place that is not prone to storm surges and landslides.

The location of the Tacloban airport, which was inundated by storm surges caused by Yolanda, is also an important issue.

After the typhoon, decaying bodies were found near the airport and its nearby villages.

“So ang tanong, meron bang intervention na magagawa to ensure na ma-minimize hindi man ma-eliminate ‘yung potential ng flooding sa Tacloban in the short term. In the long term, is Tacloban still the venue for the airport that will serve Region 8 or should it be moved elsewhere?” he said.

(The question is, what intervention should be done to ensure that potential flooding in Tacloban is eliminated or at least minimized in the short term. In the long term, is Tacloban still the venue for the airport that will serve Region 8 or should it be moved elsewhere?)

Aquino said the government will also be constructing an airport in Ormoc as an alternative transport hub.