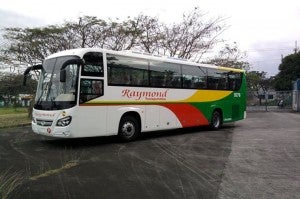 MANILA, Philippines—The Land Transportation Franchising and Regulatory Board (LTFRB) has ordered the suspension of Raymond Transport’s five units after one of its buses was involved in a fatal road accident in Quezon province last May 14.

The preventive suspension was ordered following an investigation into the road accident involving a Raymond Transport bus with plate number EVR-704  at 12:30 a.m. on May 14, along Bypass Road, Brgy. Lalig, Tiaong, Quezon, which killed two passengers and seriously injured five others.

“Right after the accident, we conducted our own investigation to check if the involved bus is roadworthy to operate,” LTFRB Chair Winston Ginez said.

The suspension covered other units of Raymond Transport plying the same route. Ginez said the buses would be subjected to a thorough inspection.