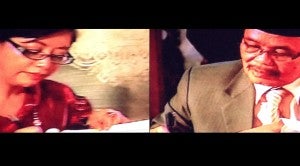 The signing of the historic Comprehensive Agreement on the Bangsamoro (CAB)

Manuel Lazaro, Philconsa chair, noted during a briefing organized by the independent bloc in the House of Representatives on Monday that certain provisions contained in the annexes of the comprehensive agreement on the Bangsamoro may require constitutional changes to be valid.

In a position paper marked “Initial Observations,” Philconsa questioned the “asymmetric” relationship between the central government and the Bangsamoro government.

It said this meant it had no fixed and agreed meaning. “It is nothing and everything. It is tricky—(a) treacherous word,” the Philconsa said.

It also questioned the gradual phasing and transfer of law enforcement functions from the Armed Forces of the Philippines to the police force of the Bangsamoro.

“We cannot have two armed forces. This is a no-no. This is risking the security, territory and people outside Bangsamoro and planting the seeds of rebellion, secession,” it said.

It also raised concerns about the annex on revenue generation and wealth sharing.

It provides that the current 50-50 mineral revenue sharing between the national government and the ARMM would only be retained with regard to uranium and fossil fuels such as petroleum, natural gas and coal.

The Bangsamoro’s share for metallic minerals would be 75 percent, while it would get all nonmetallic resources. Its regional legislature would also be able to postpone the remittance of the national government’s share of the revenues for a limited, but unspecified, period.

By law, not by treaty

The Bangsamoro territory is another contentious aspect.