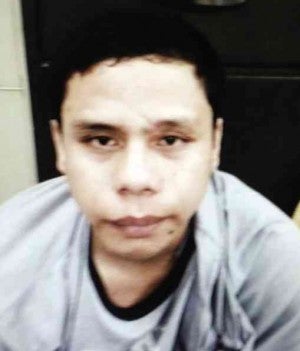 After a day-long stakeout, the police arrested on Tuesday afternoon one of the two motorcycle riders who went on an hour-long shooting spree in Quezon City which left five people dead.

Chief Supt. Richard Albano, Quezon City Police District (QCPD) director, said that Alsaid Mindalano was positively identified by a witness as the driver of the motorcycle.

However, the gunman named by the police as Mohammad “Walad” Sandigan remained at large.

The 28-year-old Mindalano, a vendor and resident of Barangay Holy Spirit, was arrested along with five other people at an abandoned house in Fairmont Subdivision, Barangay North Fairview on Tuesday afternoon. Seized from him was the motorcycle used in Sunday’s shooting spree.

Insp. Elmer Monsalve, homicide section head of the QCPD Criminal Investigation and Detection Unit, said that Alsaid Mindalano and Sandigan were positively identified by a witness who spotted the duo as they went on a shooting rampage between 1:30 a.m. and 2:30 a.m. on Sunday.

A 50-man police team went to the subdivision in Tuesday to look for the gunman, Sandigan, who had listed the area as his address.

But when they went to his house, they found Alsaid Mindalano and five other people.

Monsalve said Sandigan had been charged previously with robbery with homicide, frustrated homicide, car theft and assaulting a police officer.

Director Benjamin Magalong, CIDG chief, said there was no indication that the shooting spree was caused by the police’s failure to go on patrol in the area.

“You have to understand that the road where the killings happened (stretches over several hundred meters). We can’t expect the police to deploy personnel to every corner of the street,” Magalong told reporters.

Mayor Herbert Bautista, however, expressed his dismay over the killings as he asked the PNP to appoint new police officials for the city.

“Quezon City is the premier city so we also need premier people who can implement [laws]. I am frustrated. I feel bad because I represent the people of Quezon City as their mayor and it is time for changes in the QCPD,” he said at a hastily called press conference in his office on Tuesday afternoon.

He added that he was confounded as to how a killing spree could have taken place with all the logistical support and allowances being provided by the city government to its police force.

Bautista added that the timing of the incident was humiliating as it happened during a meeting among chiefs of police from Association of Southeast Asian Nations member-countries in preparation for the 2015 integration.

“I hope that the QCPD and the PNP will do what is necessary to remove their officials here in Quezon City who are incompetent and replace them with the police officials we need because we need to protect the image of our city and of our country,” he said.

Bautista stressed that while he still respects and trusts the QCPD director, he felt that it was time for a revamp which he was leaving to the discretion of the PNP hierarchy.  With Marlon Ramos and Jeannette I. Andrade