For Cordillerans, Mt. Pulag is sacred 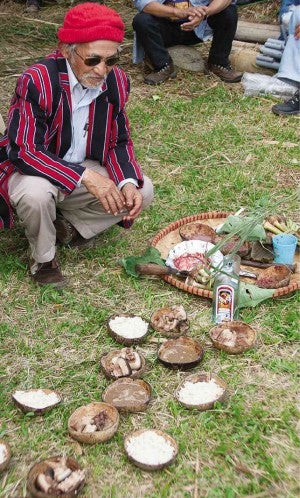 AN IBALOY ritual leader or “manbunong” chants prayers as freshly butchered meat and wine are offered to the spirits and souls of their ancestors during the opening ceremony of the Ibaloy Day in Baguio City in February. RICHARD BALONGLONG

One summer on their way back from Mt. Pulag, the country’s second highest peak in the border of Benguet and Ifugao provinces, members of a mountain climbing team from Metro Manila noted that one of them was missing.

Alarmed, they gathered the group’s strongest, the local police and volunteers to search for their missing colleague. But for four days, there was no trace of their companion, an engineer from Marikina City.

Sensing that something was unusual, the elders of Kabayan, one of the towns which shares Mt. Pulag’s area, advised that a traditional priest (“manbunong”) should intervene. The manbunong said the missing climber must have met an “amdag,” one of those spirits believed guarding the mountain.

The manbunong performed a ritual, called “benat,” where he prayed and sought forgiveness for any breach the climbers might have committed. A chicken was slaughtered as an offering to the amdag.

After the ritual, the manbunong instructed the volunteers to go to the site where the climber disappeared and should, in a loud voice, call the name of the lost climber. Lo and behold, the missing climber appeared, four days after he was reported missing. The climber appeared dazed, but he was well.

The incident during the summer of 2006 was one of the stories Kabayan-born lawyer Alfonso Aroco told during the 5th Tam-awan International Arts Festival held in Baguio City last week.

“For some people, Mt. Pulag is just a tourist spot or a mountain to climb. But for us, it is sacred as it is the abode of our ancestors,” said Aroco, a former Kabayan vice mayor and a former National Commission on Indigenous Peoples official.

Ibaloy folk believe that after they die, Mt. Pulag is the springboard toward a journey to the Great Beyond.

Aroco talked about the art and science of the Ibaloy oral tradition during the festival sponsored by the Tam-awan Village Artists (TVA) and supported by the National Commission for Culture and the Arts.

The lecture by Aroco and other speakers, who tackled the belief systems and oral traditions of various indigenous groups, point to one thing: Man, animals and plants are not the only beings on this planet.

They all point to other beings not seen by the naked eye and that these other unseen beings must be treated with respect.

The belief in these unseen beings or spirits and more importantly, a supreme spirit (the equivalent of God or Creator), whom the Ibaloy and other Igorot folk deeply revere, is the “sacred connection” between the unseen and their lands and resources, said Aroco.

The sky world, he said, is governed by the “Adikaila” or “Nanpalangka,” the highest or most supreme deity. Helping this supreme deity are 12 gods and 12 goddesses, some of whom are known as Kabunian, Lumawig, Kabigat and Balitok, Sacla told festival participants.

While the sky world spirits are “benevolent, good and our protector,” underworld spirits can be mean if their habitats are disturbed, he said.

“So one could not just cut and fell a tree without seeking permission from the spirits through a ritual,” said Sacla.

Aroco also talked about “pejew” or designated off-limits in some areas. “Once elders say pejew, we should obey without asking,” he said.

The whole ritual and belief system of the Ibaloy and Kankanaey also points to what Aroco called “responsible resource management” or what environmentalists called “environmental governance.”

Thus, sensitivity to this ritual and belief system could influence one’s perspective, as far as how one regards the land and natural resources, the speakers said.

There’s a ritual when a mother gives birth. But the ritual called “abusang” in Kabayan or “anawang” among the Kankanaey proves to be part of ensuring the mother and baby’s health care.

The abusang or anawang ritual requires a native chicken, which must be cooked with lots of ginger as this is believed to help heal the wounds of the mother. It is believed to enable her to produce enough milk for her newborn.

The abusang or anawang ritual also celebrates the “arrival” of the newborn.

The other more festive rituals are those related to marriage. But one thing most notable is that beyond the ritual is how Ibaloy, Kankanaey and other Igorot folk highly regard the sanctity of marriage.

If, for some strong reasons, a couple has to separate, the elders are called to settle or resolve a couple’s dispute. This involves another ritual, which always seeks to restore or mend broken relationships.