Lacson to Santiago: I am not gay; You will be surprised by Luy’s list | Inquirer News
Close
menu
search

Lacson to Santiago: I am not gay; You will be surprised by Luy’s list 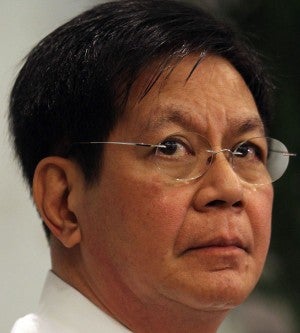 MANILA, Philippines — “For the nth time, I am not gay,” so said former senator and now rehabilitation czar Panfilo “Ping” Lacson.

Lacson was reacting to Senator Miriam Defensor-Santiago’s statement that a certain “Pinky” Lacson was also in the so-called list of “closeted gays or bisexuals in public service.”

“A high school classmate who is now a psychiatrist once advised me never to react to an insane person. It could be infectious,” Lacson said in a text message.

“Anyway, for the nth time, I am not gay. No offense to all the gays in the world, but I do not intend to be one,” he said.

And reacting to Santiago’s statement that she was pushing to get the “pork” list of principal whistleblower, Benhur Luy, Lacson said he, too, was hoping that the senator would soon get that list “so she will get the biggest surprise of her adult life.”

“I hope she gets the Benhur list soon so she will get the biggest surprise of her adult life. I can only imagine how she will feel. It is like being slapped with ten kilos of pork,” Lacson said.

“It’s amazing how a crusading crook can pretend to be at the forefront of a fight against the pork barrel system with such an arsenal of hypocrisy,” he added.

Lacson had earlier confirmed Santiago’s inclusion in the so-called “pork” lists along with other incumbent senators. Santiago strongly denied it.