Exercise the brain by using it | Inquirer News

Exercise the brain by using it 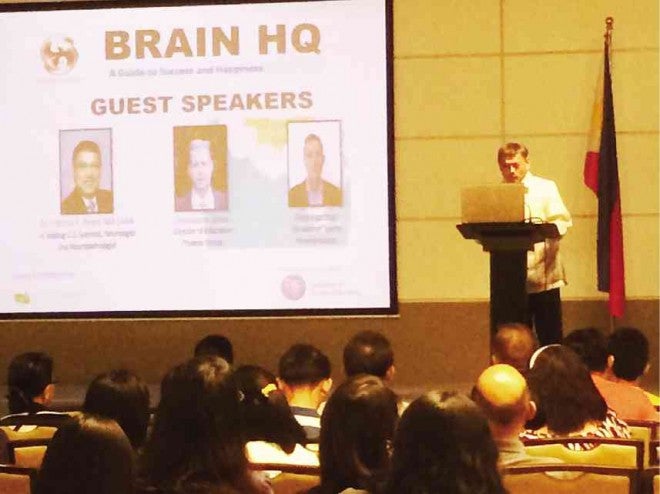 United States-based neurologist and neuropathologist Patricio Reyes introduced Brain HQ, which he called “gym for the brain,” in a lecture hosted by La Manille School of Esthetics & Wellness at St. Luke’s Medical Center in Taguig City.

A former professor at Thomas Jefferson Medical College in Philadelphia, Reyes said the human brain was regarded as the “most special organ in the body.” Although it accounts for only 3 percent of the total body weight, the brain requires 20 percent of the blood.

As the main controller of all body systems, the brain is also the “most protected part of the human body,” he said.

Brain HQ is a set of online exercises designed to stimulate the machinery that produces brain chemicals, strengthens memory and enables learning. It targets underfunctioning or disabled brain systems by physically remodeling the distorted brain because “neurons controlling attention and mood can become sluggish and, over time, begin to slowly die off.”

In a 2013 study, researchers at the University of Iowa compared brain benefits for adults aged 50 and up who used Brain HQ exercises to those who completed crossword puzzles. The results showed that Brain HQ users had significant gains in cognitive function while crossword puzzlers had none.

The exercises can be accessed at www.brainhq.com with a personal computer or a tablet. The visitor can either subscribe for a fee or just take the free trials.

The license needed to access the different activities costs P3,800, which is good for one year. This is equivalent to about P10 a day.

Reyes said Brain HQ should be practiced for an average of two hours per week, or at least 15 minutes a day, to improve brain functions.

He said users should be able to see progress after at least 10 hours of doing the exercises.

Reyes claimed that Brain HQ boosted neuroplasticity (also known as brain plasticity), or the natural ability of the brain to “change its structure, function and organization brought about by changes in environment, injury or disease throughout a human life span.”

It works by making brain cells grow back, thus helping the vital organ repair itself.

Although Brain HQ targets a varied audience of parents, educators, health buffs, students, athletes and professionals, Reyes said it could be used as well to repair brain damage in people who suffered a stroke or trauma.

It even offers an “educational perspective” to those whose loved ones might have conditions such as Alzheimer’s, Parkinson’s disease, autism, ADHD (attention deficit hyperactivity disorder) and other neurological disorders.

Developed by a team of more than 60 scientists from leading universities around the world and covered by more than 50 patents, Brain HQ has been reported effective by more than 70 peer-reviewed publications and is offered at many hospitals, academic research centers and medical centers. Currently, it is being used in at least 58 countries.

Christopher Bolan, director of education at Phoenix Group, said that apart from preventing degenerative diseases, some of the benefits of building the brain include “academic achievement, clear communication, enhanced reading skills, stronger memory and improved self-esteem.”

He cited the experiences of his son, an average kid who became an academic achiever and a youth leader after using Brain HQ for only a year.

“Getting ahead starts in our head,” said Ross Agathos, director of sports at Phoenix Group. “To maintain a competitive edge, you need an active brain.”

“Exercising the brain means using it,” he added.