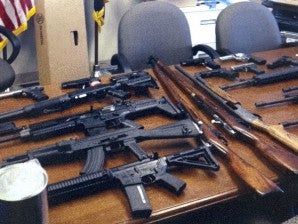 MANILA, Philippines–Authorities on Monday swooped down on a residential place used for storing illegal high-caliber firearms and explosives in Marawi City.

A joint force of the National Bureau of Investigation (NBI) and the Philippine National Police (PNP) raided a makeshift storage facility called “lumber” by the locals, which yielded several high-powered firearms and explosives.

The raid was compliant to the search warrant issued by the Marawi Regional Trial Court (RTC).

Caburnay said they have arrested the owner of the place “skilled in repairing and fabricating of firearms.” But the NBI official refused to disclose the identity and profile of the suspect.