Moscow ‘respects will of people’ after vote in east Ukraine–Kremlin 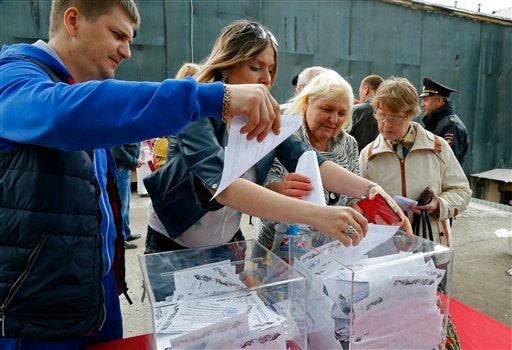 Ukrainians, who are in Russia at the moment, cast their referendum ballots in Moscow, Russia, on Sunday, May 11, 2014. AP

MOSCOW – The Kremlin said on Monday it respected the vote on self-rule in two Ukrainian regions and called for the results to be implemented through dialogue between Kiev and separatist leaders.

“Moscow respects the expression of the people’s will in Donetsk and Lugansk,” the Kremlin said in a statement, calling for “the results to be implemented in a civilised manner, without any repeat of violence, through dialogue between representatives of Kiev, Donetsk and Lugansk.”

“Any mediation efforts, including within the framework of the OSCE (Organization for Security and Cooperation in Europe), would be welcome with a view to establishing such dialogue,” the statement said.

The militants in Donetsk said that nearly 90 percent had voted in favor of independence with a 75 percent turnout.

The Kremlin stressed that the turnout was high “despite attempts to scupper the voting.”

“We condemn the use of force including the use of heavy armament against peaceful civilians which led to human casualties,” the statement added.