Abducted Nigerian girl scared to go back to school 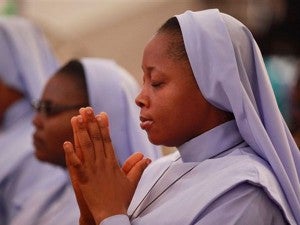 Catholics Nuns attend a morning Mass given in honour of the kidnapped Chibok schoolgirls, in Abuja, Nigeria, Sunday May 11, 2014. The failure to rescue the kidnapped girl students who remain captive after some four weeks has attracted mounting national and international outrage, and one of the teenagers who escaped from the Islamic extremists who abducted the hundreds of schoolgirls, science student Sarah Lawan said Sunday in an interview with The Associated Press the kidnapping was “too terrifying for words”. AP

BAUCHI, Nigeria— One of the teenagers who escaped from Islamic extremists who abducted more than 300 schoolgirls says the kidnapping was “too terrifying for words,” and she is now scared to go back to school.

Sarah Lawan, a 19-year-old science student, spoke Sunday as Nigerians prayed for the safety of the 276 students still held captive. Their prayers were joined by Pope Francis.

“Let us all join in prayer for the immediate release of the schoolgirls kidnapped in Nigeria,” the Roman Catholic leader tweeted, using the trending #BringBackOurGirls.

Lawan told The Associated Press that more of the girls could have escaped but that they were frightened by their captors’ threats to shoot them. She spoke in the local Hausa language in a phone interview from Chibok, her home and the site of the mass abduction in northeast Nigeria.

The failure to rescue those who remain captive four weeks later has attracted mounting national and international outrage. Last week, Nigeria was forced to accept international help in the search, after ignoring offers for weeks.

More experts are expected in Nigeria to help rescue the girls, including U.S. hostage negotiators and others from Britain, France, China and Spain.

“I am pained that my other colleagues could not summon the courage to run away with me,” Lawan said. “Now I cry each time I come across their parents and see how they weep when they see me.”

Police say 53 students have escaped. Nigeria’s homegrown Boko Haram terrorist network is threatening to sell those who remain in captivity into slavery.

In churches across the nation, Nigerians prayed for the girls, whose plight has brought together ordinary people in a year that had seen growing dissension between Muslims and Christians, disagreements exacerbated by the increasingly deadly attacks of the Boko Haram terrorist network. Africa’s most populous nation of 170 million has almost equal numbers of Christians and Muslims.

The Rev. Stephen Omale prayed at a church in Abuja, the Nigerian capital.

“Wherever they are, God will bring them out in his own mercy, he will see that they are brought out safely, without harm and also that this act will bring an end to all those who are perpetrating these acts,” he told congregants.

Boko Haram claimed two bomb blasts that killed about 100 people and wounded more than 200 in the capital last month.

Britain, Nigeria’s former colonizer, has said it hopes to help rescue the girls and to halt the 5-year-old Islamic uprising that has killed thousands of Muslims and Christians and has driven some 750,000 people from their homes.

U.S. Defense Secretary Chuck Hagel cautioned that it is “going to be very difficult” to find the missing girls. In an interview with ABC’s “This Week” that aired Sunday, he said ” It’s a vast country… But we’re going to bring to bear every asset we can possibly use to help the Nigerian government.”

The office of Israeli Prime Minister Benjamin Netanyahu said in a statement that the leader spoke with Nigeria’s president and told him: “We are ready to assist in locating the girls and fighting the brutal terrorism inflicted on you.”

It did not elaborate on what kind of assistance Israel is offering. Israel has security relations with Nigeria as well as other African nations, including Kenya whom Israel helped with security advisers in the Nairobi mall attack.

A Nigerian security expert warned that militants may have laid land mines to discourage any pursuit, and said strategists may be considering starving them out.

“They may have laid land mines, one cannot rule that out,” formed Nigerian Air Force Commodore Darlington Abdullah said on Sky TV. And “even as they go along abducting children, they are also going after food, grabbing food,” Abdullah said.

“The future of these missing schoolgirls hangs in a balance. The council should not leave them to fend for themselves,” executive director Adetokunbo Mumuni of the Socio-Economic Rights and Accountability Project said in a statement.

He said targeted sanctions would send a strong message.

U.S. Senator Charles Schumer called for a reward, including refugee status, for anyone who is not a terrorist that provides help leading to the girls’ rescue.

The United States already has designated Boko Haram a foreign terrorist organization, as has the European Union, making it illegal to contribute to the group. And Washington last year put a $7 million ransom on the head of Boko Haram leader Abubakar Shekau, who said in a video last week that he will sell the girls into slavery.

There also have been reports that some of the girls have been forced into marriage with their abductors, who paid a nominal bride price of $12, and that some have been carried across borders into Cameroon and Chad.

Lawan said other girls who escaped later have told her that the abductors spoke of their plans to marry them.

She said the thought of going back to school terrifies her — either the burned out ruins of Chibok Government Girls Secondary School or any other school. But it will have to be done if she is to realize her dream of studying law.

“I am really scared to go back there; but I have no option if I am asked to go because I need to finish my final year exams which were stopped half way through,” she said.