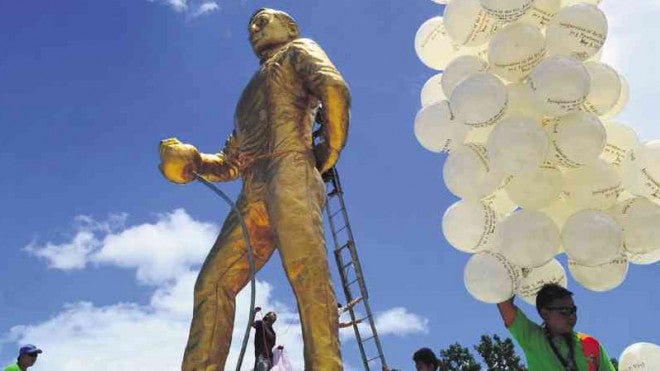 STA. CRUZ, Laguna—Laguna still has the tallest Rizal monument in the world.

But this one, unveiled at the opening of Palarong Pambansa in this town early this week, depicts the national hero, Jose Rizal, as a sportsman.

“Normally, Rizal is depicted as a scholar, doctor and philanthropist. It’s about time we give importance to his (inclination for) sports,” said Michael Delto Abarquez, Laguna tourism chief and committee chair of the national sports competition.

The 7.9-meter bronze statue was erected about a month ahead of the annual Palarong Pambansa, which is being held for the first time in Laguna.

The Rizal statue, holding an épée, stands on a flight of stairs, which serves as the 1,000-square-meter-wide pedestal for the monument. The hollow underneath the stairs will be developed into a museum and a library about Laguna and Rizal’s history.

The Laguna provincial government has spent at least P6 million for the construction of the newest structure inside the Laguna Sports Complex. In 2010, it spent P5 million to build two bronze Rizal statues, each standing 2 meters tall, inside the Laguna capitol compound, also in this town.

According to Abarquez, the newest Rizal statue is now the tallest in the world, beating the hero’s 6.7-meter bronze monument in Calamba, Laguna, that was unveiled by President Aquino for Rizal’s 150th birth anniversary in 2011. Calamba is Rizal’s birthplace.

“It is also the only one of its kind (of Rizal as an eskrimador) in the world,” he said. Eskrima is a type of Filipino martial arts likened to dueling or fencing.

Abarquez said the creation of yet another Rizal monument was not just meant to attract more tourists but “to inspire” young athletes. About 11,200 students from 17 regions joined the national sports competition which will end on May 10. Aside from the athletes, there were about 1,200 teachers, coaches and parents.

Gregorio Arcangel Jr., international relations trade officer for Laguna, said hosting the sporting event would boost the local economy, especially in the province’s fourth district, which is farthest from Manila.

He said the provincial government expected to generate at least P68 million in revenues daily during the weeklong event, from transportation and accommodations alone. Trade booths showcasing local produce have also been put up inside the sports complex.

“Some of the participants actually arrived here months ago to acclimatize,” Arcangel said.

Other guests and athletes, he said, also took the chance to visit some of Laguna’s tourist spots like the Pagsanjan Falls.

“This is a good way of showing the world that Laguna is not only a sports destination but a tourist destination too,” Abarquez said.

Next year’s Palarong Pambansa is slated to be held in Mindanao, with four provinces—Butuan, Surigao, Koronadal and Tagum City—bidding to host it.

Rizal seen as icon for tourism in PH