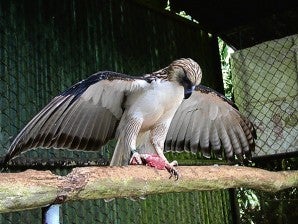 NORTH COTABATO, Philippines — Environment authorities here are trying to rescue and save a wounded Philippine Eagle captured by villagers in a remote area here over the weekend, according to officials.

“We are checking on it if indeed it was an endangered eagle,” Eduardo Limsaga, Magpet municipal environment officer, told reporters.

Roy Pelonio, chairman of Barangay (village) Manobo, said one of the two eagles captured by the locals was turned over to him Saturday.

Local authorities received reports that two big birds were captured by air-gun wielding farmers in the thick forest of Barangay Manobo, butchered one and handed over the other to local government officials.

The eagle, reportedly weak and stressed, was captured at the foot of the country’s highest peak – Mt. Apo, home of the endangered Philippine eagles.

Limsaga and other environment officials are on their way to the remote village to retrieve the big bird.

“We will turn it over to the Philippine Eagle Foundation (PEF) in Davao as soon as we have it,” he said.

Late last year, a wounded Philippine eagle was also captured in Magpet, turned over to the DENR, which in turn handed it over to the Philippine Eagle Foundation in Davao City. The big bird died later due to complications.

The Philippine Eagle (Pithecophaga jefferyi) is of the family Accipitridae, which is endemic to forests in the Philippines. It has brown and white-colored plumage, and a shaggy crest, and generally measures two to three feet in length and weighs four to eight kilograms.

Among the rarest and most powerful birds in the world, it has been declared the Philippine national bird.

According to PEF, it is critically endangered, mainly due to massive loss of habitat due to deforestation in most of its range.

Killing a Philippine Eagle is punishable under Philippine law by 12 years in jail and heavy fines.

North Cotabato is home to several endangered species, including Philippine crocodiles captured in the Liguasan marshland in Mlang, North Cotabato last month and later returned to the wild.

Just as the reptile was on its way back to the wild, another endangered species was found in Barangay New Antique, also in Mlang.

A family of three tarsiers was found last week by villagers who turned it over to local DENR officials.