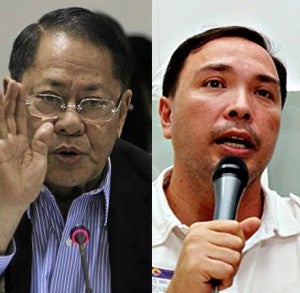 Former Sen. Edgardo Angara (left) and former Palawan Rep. Abraham Mitra refuse to take responsibility not only for the reputed failure of the Agricultural Competitiveness Enhancement Fund but also for how it was allegedly pillaged by dummy companies fronting for lawmakers. INQUIRER FILE PHOTOS

MANILA, Philippines—They were the brains and gatekeepers of a multibillion-peso farm subsidy fund supposedly meant to prepare the agriculture sector for the country’s trade integration into the Southeast Asian market next year, but official documents showed their bailiwicks became the biggest beneficiaries of their pet legislation.

Six years after extending in 2007 the Ramos-era Agricultural Competitiveness Enhancement Fund (Acef) and allocating P6 billion in fresh funds, former Sen. Edgardo Angara and former Palawan Rep. Abraham Mitra refuse to take responsibility not only for the reputed failure of the project but also for how it was allegedly pillaged by dummy companies fronting for lawmakers.

Both lawmakers themselves channeled a combined P410.27 million in Acef money intended for grants and no-interest, no collateral loans to their respective provinces, the Inquirer has learned.

The documents showed Angara endorsed P100.07 million in funds for Aurora State University to build a “bangus” (milkfish) park and research center, coconut  processing plant and feed mill plant in 2008; and another P200 million for the improvement of the Baler-Casiguran Road in 2008; while Mitra pushed for the construction of a P10.2-million abaca farm for Palawan State University in 2008; and another P100 million for  the Department of Agriculture (DA) to eradicate mango pests in his province in 2009.

Angara and Mitra claimed that both of these projects were fully implemented.

“It’s difficult to make sweeping allegations of a scam. I think each company that borrowed should be investigated before making any general conclusion,” Angara said in a phone interview. He said Acef was a well-intentioned program that the country needed at the time it was implemented.

Angara and Mitra said the projects should be classified as grants and not lumped together with the P4.388 billion in arrears that the Commission on Audit (COA), in its 2012 annual financial report, claimed that the Department of Agriculture had yet to collect from more than 250 companies. This represents 80 percent nonpayment of the P5.38 billion released under Acef before it was suspended by the Aquino administration in 2011.

As early as 2011, then Sen. Francis Pangilinan, cochair of the congressional oversight Committee on Agriculture and Fisheries Modernization, said some of those who applied for the fund were personalities and politicians “favored” by the past administration.

The Acef scam resurfaced anew after one of its biggest recipients was embroiled in the pork barrel scandal. At least P775 million in Acef funds went for the food processing and cold chain project of National Agribusiness Corp. (Nabcor) in 2007 and 2008.

Nabcor was then managed by Alan Javellana, who is facing plunder charges for allegedly conspiring with detained businesswoman Janet Lim-Napoles to divert P1.25 billion in Priority Development Assistance Fund (PDAF) allocations of 83 lawmakers to fake foundations.

As chair of their respective agriculture committees in the 14th Congress (2007 to 2010), Angara and Mitra sat on the oversight congressional committee that had the final say on the release of Acef funds worth more than P15 billion.

Mitra said that while he and Angara authored the bill extending Acef, they were not responsible for its implementation. “Our roles were just ministerial,” Mitra said. He added that there were other members of Congress on the oversight committee.

The paperwork was handled by the Department of Agriculture, under then Secretary Arthur Yap, now a Bohol representative, and Land Bank of the Philippines whose president then was Gilda Pico. Pico also had oversight of the National Livelihood Development Corp., which Napoles allegedly used in her PDAF scam.

Mitra claimed that he was assured by former Agriculture Undersecretary Bernie Fondevilla, a protégé of Yap, during the 2007 deliberations that the DA would be stricter and prudent in deploying the funds after a number of companies that had defaulted continued to have access to the facility.

In a phone interview, Yap claimed that he made every effort to ensure that the Acef loans would be repaid.

Former Maguindanao Rep. Didagen Dilangalen was also listed among those who availed themselves of the Acef. Dilangalen, as chair of Moro Development Co. Inc., borrowed P14 million in 2009 for his sugar farm in Shariff Kabunsuan, Cotabato City.