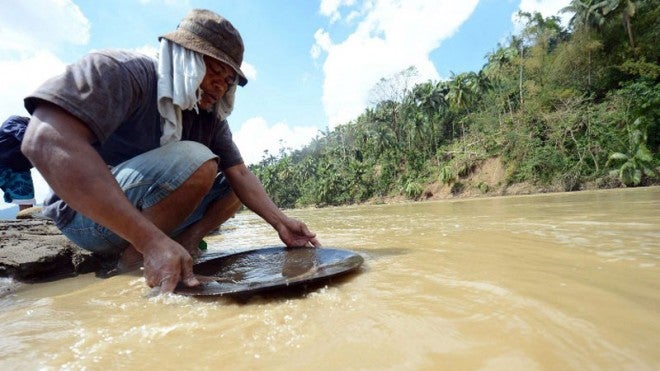 A miner pans for gold at a river near the typhoon disaster zone in Mawab town, compostela valley province on Dec. 9, 2012. Communist rebels seized dozens of prospectors in a remote Philippine gold rush site in Compostela Valley and used them as “human shields” against pursuing troops, a military official said on Sunday. AFP PHOTO/TED ALJIBE

MANILA, Philippines—Communist rebels seized dozens of prospectors in a remote Philippine gold rush site and used them as “human shields” against pursuing troops, a military official said on Sunday.

Capt. Ernest Carolina, spokesman of the Philippine Army’s 10th Infantry Division, said gunmen from the NPA’s Front 2 and Pulang Bagani (Red Warrior) Company 6 herded the 39 residents from Mahayahay village at around 10 a.m. and brought them to Sitio (settlement) Tabon, Panamin, in the nearby town of Mabini.

In a text message to the Inquirer, Carolina said Juanito Torcende and Alejandro Hoylar Sr., Mahayahay barangay chair and councilor, respectively, reported the alleged hostage-taking to the 66th Infantry Battalion and asked for assistance.

Local officials persuaded the rebels to free most of the miners, although it is believed that around a dozen were still being held at the site.

“It’s a desperate move,” Logico said. “They are using them as human shields. They know that without the civilians they are vulnerable to an assault.”

Logico said the military launched an assault on two fronts last week to flush out the rebels amid reports that they were harassing villagers.

“We had been conducting platoon-size combat operations that forced them to flee,” he said, adding that in all, two battalions, or around 800 men, were involved in the operation.

The NPA still has to issue a statement on the incident.

The mountainous area where the offensives took place is a mineral-rich site that has over the years attracted thousands of prospectors who operate illegal gold mines.

Entire villages have been set up around such mines, which have also become a lucrative source of extortion money from the rebels, officials said.

The NPA is the armed wing of the Communist Party of the Philippines, whose Maoist rebellion has claimed tens of thousands of lives since 1969.—AFP and Frinston L. Lim, Inquirer Mindanao