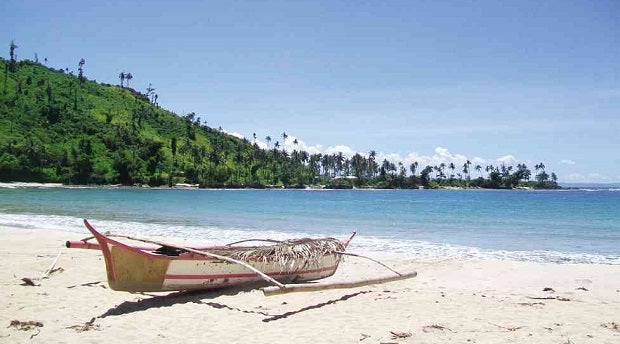 TREASURE Island draws its name from rumors that World War II-era treasures had been buried in it. The island is a tourism treasure in itself, according to officials. FRINSTON LIM

BAGANGA, Davao Oriental—Along the Pan-Philippine Highway in the eastern side of Mindanao is an unspoiled gem of crystal-clear sea teeming with rich marine life on one side and mountains with lush forests pockmarked with numerous caves on the other, waiting to be explored.

Squeezed between the vast Pacific and hills that form part of the ranges separating Compostela Valley and Davao Oriental provinces, the fishing and farming village of Ban-ao is worth writing down on the bucket list of even the average backpacking tourist.

Some 154 kilometers from the provincial capital Mati City, Ban-ao is a three-hour journey on a well-paved national road that cuts through cliffs of the northeastern part of the province.

The distance and long travel are made more interesting and enjoyably unnerving by islands, islets and fishing communities dotting the blue waters hundreds of meters below.

For years, Ban-ao has been a stopover for tourists and travelers bound for more known destinations further north, like the waterfalls of Aliwagwag in nearby Cateel municipality, says village chief Mera Ching.

People on Cateel-bound buses or on private vehicles stop by the village for a few minutes to take “selfies” with the sea as the background.

As Ban-ao’s kilometers-long coastline and clean sea gained attention, the stopovers have become longer, with travelers staying for hours for swimming or more sightseeing, according to village councilor Roy Langcoyan.

But officials acknowledge that tourism is still a new industry for the community of 1,600 people.

Ching says they have been pushing to make Ban-ao a top destination through ecotourism programs in the last two years.

The devastation wreaked by Typhoon “Pablo” in 2012 did not only kill 17 villagers, but also stalled tourism-related projects that the community had started.

Thousands of mangrove hills were wiped out in Ban-ao’s Mangguso Marine Protected Area as a result of the typhoon.

“We had to start from whatever [the typhoon] had left,” Langcoyan says.

Ironically, a novel tourism concept was born out of the disaster as the village saw the industry as an alternative form of livelihood in lieu of fishing and farming, which were hit badly by the typhoon.

Called “volun-tourism,” the idea was for tourists and visitors to enjoy Ban-ao’s natural wonders while at the same time volunteer in the reconstruction of public buildings and other infrastructures or help in the community’s handicraft industry.

“But the concept did not really take off as the rebuilding of public structures and other rehabilitation programs were already completed before tourists could come,” the village chief says.

Ching says the village is aiming to become a prime ecotourism destination with a program called “From Ridges to Reefs” that will promote Ban-ao’s caves and coast.

The Department of Environment and Natural Resources (DENR), through the Bureau of Fisheries and Aquatic Resources, has provided assistance for the development of the marine protected area.

Efforts to rehabilitate the village’s ecotourism attractions include reforestation of the Mangguso mangrove forest and improving the trails to the caves, according to officials.

Ching says the DENR people have inspected three of the five caves located in an unnamed hill some 3 kilometers from the village proper.

“Three of the caves are said to have an underground body of water, like those in Palawan province, that is suitable for boating,” says Roy Ignacio, also a village councilor. “The [caves] are rich in guano [droppings], indicating a large population of bats.”

Langcoyan says Ban-ao’s ecotourism program is focused on the development of the marine protected area, “because it’s a three-in-one tourism spot.”

“Aside from the coral reefs, the area is a site where you can see sea grass and, of course, the mangrove forest, which hosts a community of monkeys and other animals,” he says.

Officials see tourism in Ban-ao taking off in the next two years.

Ching says the village is in a good position to make a name in tourism because of its peace-and-order situation.

Ban-ao, compared to other villages in Baganga, is not known to be a battleground for communist rebels and government forces. Officials, however, cross their fingers that the situation will hold.

Visitors can be accommodated in a hall that was built by nongovernment organizations and can serve as a hostel for up to 20 people staying overnight.

Visitors can also pitch tents on the coast.

Alan Ignacio, secretary of the self-reliant group Ban-ao Fisherfolk Association (BFA), says guests may ask the community to cook for them for a minimal fee.

“Actually, cooking is a component of our ecotourism package,” he says. “Guests can have crabs, fish and other fresh bounty from the sea,” he adds.

The sea off the village and around the marine protected area is ideal for boating and snorkeling.

Attractions in Ban-ao include two islets off the village. Treasure Island, a rock formation that is less than a hundred meters from shore, can be reached either by boat or by foot when the tide is low.

Named so as a result of rumors that World War II-era treasures are buried there, Treasure Island offers visitors a site to relax and just view the sea from the ruins of a hall that Typhoon Pablo destroyed in 2012.

From the Davao City overland transport terminal, one can take a Mati-bound Bachelor Express bus for P300. At the Mati bus terminal, vans or buses bound for Cateel pass by Ban-ao, with fares ranging from P250 to P300.