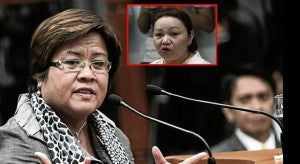 MANILA, Philippines—The future of Lim Janet Napoles now rests on her former employees, including Benhur Luy, whom she allegedly detained for three months for supposed infractions, as they will play a big role in the process of her application to be admitted as state’s witness, according to Justice Secretary Leila de Lima.

“I explained the circumstances around my meeting with Janet Napoles and I assured them that the information provided by Napoles will go through a vetting process and they will be the first people we will consult as part of the vetting process,” De Lima told reporters.

De Lima’s statement was echoed by Luy’s lawyer, Raji Mendoza, who accompanied Luy to the meeting with De Lima on Friday.

“We were assured that our witnesses will be at the core of the validation process with respect to the deposition of Ms Napoles. Our witnesses are zealously preparing for this vetting process,’’ Mendoza said.

Mendoza added that the whistle blowers have “full trust and confidence in the wisdom and prudence exercised by Secretary de Lima in seeking the truth.’’

Absent from the meeting was lawyer Levito Baligod, the former lawyer of Luy who is still counsel for Merlina Sunas, one of the witnesses who was also present in the meeting with De Lima.

The meeting lasted  more than hour and De Lima said she assured the whistleblowers they would have a crucial role when investigators start the vetting process.

The justice secretary said the whistleblowers expressed willingness to help in the validation of information provided by Napoles.

“They will be the first ones we will talk to when we start vetting, validating information from Mrs. Napoes and very willing to help in that process,” De Lima said.

De Lima again declined to give details of Napoles’ statements, saying investigators had yet to complete their validation process.

De Lima described the meeting with the whistleblowers as “cordial and friendly.” She said “everybody was smiling and was relaxed.”

According to a source who was at the meeting, the whistleblowers apologized to De Lima for their initial reaction to her meeting with Napoles and the possibility of her being a state witness like them.