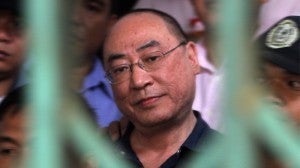 The high tribunal, in a two-page resolution dated April 22, cited “lack of merit” in rejecting Lee’s April 14 and 15 motions for oral arguments in the case related to his arrest.

The resolution, signed by clerk of court Enriqueta Vidal, means Lee’s case will be decided by the high court on its merits.

Lee, the president of real estate firm Globe Asiatique, questioned his arrest by the Philippine National Police despite a Court of Appeals ruling that dropped the arrest warrant issued against him.

The Department of Justice and the Home Development Mutual Fund, or Pag-Ibig, the government housing agency, however, had contended that they had questioned the appellate court’s ruling in the Supreme Court, so the warrant against Lee remained in effect.

Lee countered that the Court of Appeals had reversed the Pampanga Regional Trial Court’s finding of probable cause to try him for syndicated estafa in connection with the P6.6-billion in Pag-Ibig housing loans that were allegedly lent to “ghost borrowers” who had bought units in Globe Asiatique’s housing projects.

Lee was arrested on March 6 at the Hyatt Hotel in Manila after months on the run as a fugitive from the law.