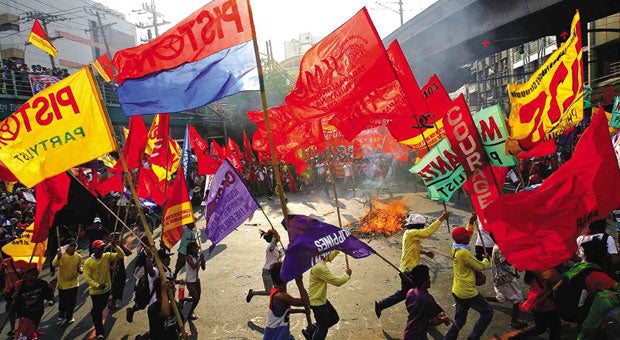 MANILA, Philippines—Labor groups on Thursday expressed “extreme disappointment” with the four-year-old Aquino administration over its lack of concern for workers and its failure to protect jobs, raise wages and reduce power rates.

Thousands marched to the Mendiola area near Malacañang to mark the 128th celebration of International Labor Day and push for job security, higher wages, lower cost of basic services and an agro-industrial plan for economic growth.

“While we greatly appreciate the candidness and willingness of P-Noy (the President’s nickname) to hold dialogues with labor, at the other end are our members waiting for significant things to move after two years of negotiations. It cannot be all talk,” the group Nagkaisa said in a statement.

Nagkaisa is an umbrella organization formed in 2012 to unite labor federations and bolster their collective bargaining capacity with the government.

Its more than 40 member groups include the Trade Union Congress of the Philippines, Federation of Free Workers, Alliance of Progressive Labor and Bukluran ng Manggagawang Pilipino.

Kilusang Mayo Uno (KMU), which held a separate protest at Mendiola in the afternoon, is not part of Nagkaisa because of ideological differences.

About 6,500 members of KMU took part in the protest, demanding the government to raise the minimum wage by P125.

Except for the bombastic speeches and the burning of effigies of Aquino, Thursday’s observance of Labor Day was peaceful, according to the Philippine National Police.

Chief Supt. Reuben Theodore Sindac, PNP spokesman, said no untoward incidents had been reported anywhere in the country as of 5 p.m. Thursday.

“Maybe the protesters were already tired after participating in several rallies during [US President Barack] Obama’s visit earlier this week,” he said.

Vehicular traffic in the areas in Manila where militant groups staged programs was not disrupted, Sindac said, adding that he himself went around to see the rallies.

“The demonstrations were all orderly. The PNP respects the workers’ right to express their sentiments and air their grievances peacefully,” he said.

Nagkaisa said it mobilized around 30,000 members for Thursday’s protest. The police, however, estimated that the crowd peaked at 5,000 at

“Despite the country’s 7.2-percent gross domestic product growth last year, second only to China’s 7.7 percent, it remains far from inclusive as the Philippines still has the highest unemployment rate in the region,” said Frank Mero, chair of  Sentro ng mga Nagkakaisa at Progresibong Manggagawa.

“It is not straight, it is not right, it is unjust if growth is enjoyed only by a few,” a Nagkaisa streamer said.

The group said workers may be seeing the dead-end of the “straight path,” the Aquino administration’s term for “good government,” as President Aquino goes into the “last two minutes” of his term.

Nagkaisa said the Aquino administration had not produced a clear and workable plan to lower the price of electricity.

The administration’s economic policies on privatization, deregulation and trade liberalization do not differ from those of former President Gloria Macapagal-Arroyo, the group said.

The protesters carried an effigy of Aquino smoking a cigarette and marked “Zero” to show what workers had received from his administration.

Renato Magtubo, national chair of Partido ng Manggagawa, said even the job fairs held Thursday by the Department of Labor and Employment was a gimmick from Arroyo’s time.

“Of over 100,000 vacancies available at the job fairs, most are [jobs]  formerly [held] by contractual workers [whose contracts have expired],” Magtubo said.

He said Aquino’s dialogue with labor leaders on Tuesday did not result in anything concrete. “P-Noy [did not commit to] tax breaks, lower electricity rates and the security of tenure bill despite being items on the table for the past two years,” he said.

“While the administration pays lip service to inclusive growth, unemployment and underemployment remain unchanged because of its cheap-labor policy, regulations allowing contractualization, labor repression and the preference for foreign investment and public-private partnership,” Magtubo said.

His group called for a P135 pay increase to reflect the true value of the P466 minimum wage, considering the increase in prices of basic goods and electricity.

“That’s just for the inflation adjustment of the minimum wage. But what we really need is a living wage,” De Guzman said, citing the National Economic and  Development Authority (Neda) determination that P1,056 is the living wage for a family of four.

Partido ng Manggagawa called for the establishment of an agro-industrial policy to strengthen local agriculture and industry as basis for growth that will provide regular work and living wages.

“The workers’ [call] for an agro-industrial policy has fallen on deaf ears since administration finance and economic officials argue dogmatically that the state’s only economic role is to encourage workers and the poor to become microentrepreneurs,” Magtubo said.

The Philippine Government Employees Association called for a civil service code and the ratification of the International Labor Organization Convention 151 concerning the protection of the right to organize and procedures for determining conditions of employment in the public service.

Tommy Berger of the Swedish group Workers Education Association said: “We need to fight the market forces. The market is a good producer but a lousy distributor.”

No benefits to workers

At Liwasang Bonifacio in central Manila, protesters demanded a P125 pay increase and urged measures that would raise wages and wage levels across the country.

He said contractualization benefited only employers and destroyed workers’ gains in their fight for job security.

Workers’ groups from other parts of Luzon sent representatives to the protest in Manila to add their voices to demands that the government end contractualization and ensure job security.

Among the groups was Unyon ng mga Manggagawa sa Agrikultura, which called for the abolition of the buy-all system that allowed the purchase of farmers’ produce but not payment for their labor.

In Isabela province, about 300 workers gathered in Roxas town to protest the government’s inaction on labor’s longstanding demand that the minimum wage be raised by P125.

Ben Cardenas, leader of the group, also assailed the government for its failure to improve the living conditions of farmers.

In the Visayas, thousands of protesters, including survivors of Super Typhoon Yolanda (international name: Haiyan), marched across Panay Island to demand the release of assistance to the storm victims.

The typhoon survivors demanded assistance of P40,000 for every family in addition to shelter and livelihood.

“Only big business companies have benefited from these partnerships, which bargain vital infrastructure and services to private investors at the expense of taxpayers,” KMU coordinator Elmer Forro said.

In Estancia town in Iloilo, about 1,000 people took part in a protest staged by the Iglesia Filipina Independiente, which included a march to the public market.