3,000 get hired on the spot at job fairs | Inquirer News
Close
menu
search 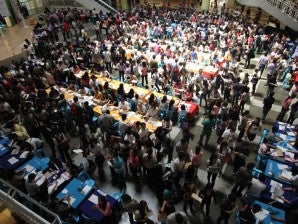 MANILA, Philippines—Almost 3,000 job seekers were hired on the spot at job fairs sponsored by the government across the country on Thursday to mark International Labor Day.

According to data from the Department of Labor and Employment (DOLE), as of 4 p.m., 2,788 applicants had been hired on the spot at the job fairs.

The figure was 13.5 percent of the 20,718 applicants who registered and qualified for local and overseas employment, the DOLE said.

He said the labor department was confident it could meet the annual average after the numbers from all the regions had come in.

“We always remain optimistic because the usual trend is we are below the target early on but as the day goes on, we are able to have more [job seekers hired on the spot],” Fameronag said.

According to Labor Secretary Rosalinda Baldoz, the job fairs were not a band-aid solution to the high jobless rate, as they were organized to deal with the unemployment problem.

Among the job seekers hired on the spot, 1,779 were for local jobs and 485 were for jobs abroad.

Those immediately hired at job fairs are mostly employed locally as factory workers and sales staff, according to Bureau of Local Employment (BLE) Director Dominique Tutay.

As for those hired for overseas jobs, the usual destinations are Saudi Arabia, Dubai and Taiwan, she said.

A total of 140,338 vacancies were offered by 610 local and overseas employers in 69 job fairs conducted in all 16 regions, except in the Autonomous Region in Muslim Mindanao (ARMM).

In Naga City, Camarines Sur province, government-assisted groups and the military set up their own booths to encourage job seekers  to go into small businesses as an alternative source of income.

Among those who took part in the fair were women’s groups from Baao and Buhi towns that make bags and accessories using water hyacinth cloth and abaca.

Lt. Col. Perfecto Peñaredondo, assistant chief of staff for personnel of the 9th Infantry Division of the Philippine Army, said the military booth offered young people the opportunity to serve in the military.

The rest were local jobs offered by 80 companies, he said.

Sarcauga said his department was aiming for the 15-percent average for on-the-spot hiring.

“It’s not easy. The applicants should be qualified and have the necessary documents for them to be hired on the spot,” he said.

Labor officials said at least 7,000 job seekers had visited the fair as of 11 a.m. They said they were expecting more would come before the fair closed at 5 p.m.

Jollibee at the fair

One of the companies that took part in the fair was the fast-food chain Jollibee, which has a branch at the Robinson’s shopping mall in Tacloban City.

Branch official Hansel Tengzon said Jollibee’s participation in the job fair indicated that it would continue to operate in Tacloban City despite the devastation caused by Super Typhoon Yolanda last year.

“We are still very optimistic that Tacloban remains a good place to do business,” Tengzon said.—With reports from Shiena M. Barrameda, Inquirer Southern Luzon; and Joey A. Gabieta, Inquirer Visayas

Employment rate up in Metro Manila—DOLE

DOLE appeals for flexibility among employers in hiring of fresh graduates