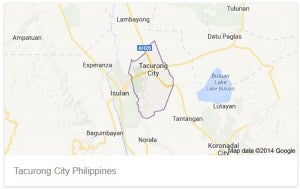 TACURONG CITY, Philippines—Government agents re-arrested here on Wednesday night one of Mindanao’s most wanted men, about a year after he escaped from the Cotabato City jail, officials said Thursday.

Colonel Dickson Hermoso, public affairs chief of the Army’s 6th Infantry Division based in Maguindanao, said Datukan Samad, alias Commander Lastikman, was nabbed inside a videoke bar in Tacurong City at past 9 p.m.

Hermoso said Samad did not resist arrest when nabbed at a roadside beer drinking joint by police and military operatives.

He said the recaptured fugitive was brought to General Santos City.

Samad, whose capture carried a P250,000 reward, escaped from the Maguindanao provincial jail in Cotabato City on May 2, 2013 by sawing off the iron bars of his detention cell.

Before he was moved to the Maguindanao jail that year, Samad’s companion attempted to rescue him from the city jail of Kidapawan City.

Three people were killed and 12 others were wounded when heavily armed men in black ski-masks and fatigue uniforms stormed the Kidapawan City jail.

Samad’s cohorts failed to spring him out though.

“We have learned our lessons in the past.  The government will not allow another escape by Samad,” Hermoso told reporters.

Samad had been linked to the Moro Islamic Liberation Front but the rebel group, which signed a peace deal with Manila this year, disowned him.