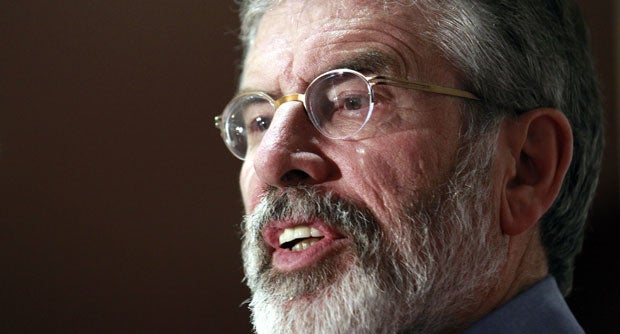 • Was the longtime British parliament member for West Belfast

Adams, 65, confirmed his own arrest in a prepared statement and described it as a voluntary, prearranged interview.

Police long had been expected to question Adams about the killing of Jean McConville, a 38-year-old mother of 10 whom the IRA killed with a single gunshot to the head as an alleged spy.

According to all authoritative histories of the Sinn Fein-IRA movement, Adams served as an IRA commander for decades, but he has always denied holding any position in the outlawed group.

“I believe that the killing of Jean McConville and the secret burial of her body was wrong and a grievous injustice to her and her family,” Adams said. “Well publicized, malicious allegations have been made against me. I reject these. While I have never disassociated myself from the IRA and I never will, I am innocent of any part in the abduction, killing or burial of Mrs. McConville.”

Reflecting the embarrassment associated with killing a widowed mother, the IRA did not admit the killing until 1999, when it claimed responsibility for nearly a dozen slayings of long-vanished civilians and offered to try to pinpoint their unmarked graves. McConville’s children had been told she abandoned them, and they were divided into different foster homes.

Her remains were discovered only by accident near a Republic of Ireland beach in 2003. The woman’s skull bore a single bullet mark through the back of the skull, and forensics officer determined she’d been shot once through back of the head with a rifle.

Adams was implicated in the killing by two IRA veterans, who gave taped interviews to researchers for a Boston College history archive on the four-decade Northern Ireland conflict. Belfast police waged a two-year legal fight in the United States to acquire the interviews, parts of which already were published after the 2008 death of one IRA interviewee, Brendan Hughes.

Both Hughes and Price agreed to be interviewed on condition that their contents were kept confidential until their deaths.

In his interviews Hughes, a reputed 1970s deputy to Adams within the Belfast IRA, said McConville was killed on Adams’ orders. Hughes said Adams oversaw a special IRA unit called “The Unknowns” that was committed to identifying, killing and secretly burying Belfast Catholic civilians suspected of spying on behalf of the police or British Army. An independent investigation by Northern Ireland’s police complaints watchdog in 2006 found no evidence that McConville had been a spy.

Hughes told the researchers he led the IRA team that “arrested” McConville, but her fate was sealed following a policy argument between Adams and the man he succeeded as Belfast commander, Ivor Bell.

He said Bell wanted McConville’s body to be put on public display to intimidate other people from helping the British, but Adams wanted her killing kept mysterious.

“There was only one man who gave the order for that woman to be executed,” Hughes said in the audio recording, which was broadcast on British and Irish television in 2010. “That man is now the head of Sinn Fein. I did not give the order to execute that woman. He did.”

A 2010 book written by the lead researcher, journalist Ed Moloney, “Voices From the Grave,” also quoted Hughes as describing Adams as the IRA’s “Belfast Brigade” commander who oversaw planning of the first car-bomb attacks in London in March 1973.

Adams and Hughes were arrested together in July 1973, when the British Army pounced on an IRA commanders’ meeting in West Belfast. Both were interned without trial. Adams was repeatedly interrogated for suspected involvement in IRA bombings and shootings, but was never convicted of any IRA offense besides a failed prison escape during his mid-1970s internment.

Price, who was a member of the IRA’s 1973 London car-bombing unit, died last year of a suspected drug overdose. She gave interviews to journalists admitting she had driven McConville across the Irish border, where another IRA member shot McConville once through the back of the head. It remains unclear what precisely she told the Boston College project.

Adams was the longtime British Parliament member for West Belfast, although like all Sinn Fein politicians he refused to take his seat in London, citing the required oath of allegiance to Queen Elizabeth II.

He never held a post in Northern Ireland’s power-sharing government, the central peacemaking institution established in the wake of the Good Friday accord of 1998. He stepped down as West Belfast’s MP in 2011 and won election to the Republic of Ireland parliament, where he represents the same border area, County Louth, where McConville’s body was found.