With Ayungin on his mind, Aquino hails brave Navy men 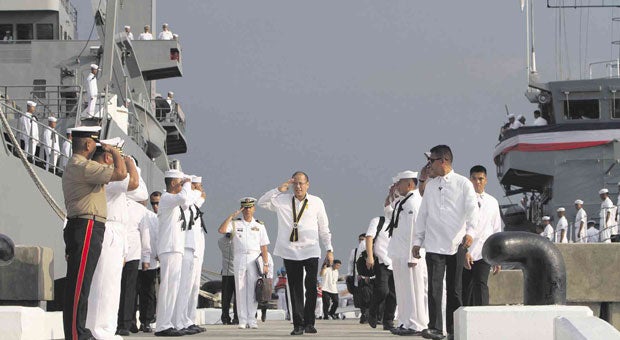 SALUTE TO THE CHIEF President Aquino arrives at Sangley Point in Cavite City for the Philippine Navy change of command, with the retirement of Vice Adm. Jose Luis Alano and his replacement by Rear Admiral Jesus Millan. EDWIN BACASMAS

SANGLEY POINT, Cavite—President Aquino on Wednesday hailed the Philippine Navy for its tenacity in guarding Philippine territories being claimed by China, saying its leaders and sailors did not allow lack in matériel to shirk from their sworn duties.

The President made the remarks as the Navy Flag Officer in Command (FOIC), Vice Adm. Jose Luis Alano, relinquished the Navy’s helm to Rear Adm. Jesus Millan at sunset, a Navy tradition. Alano turns 56 Thursday, the mandatory retirement age in the military.

“Today, we are surrounded by brave Filipinos. Every time we talk about the courage and dedication of our Philippine Navy, one of the first things I think of are the Marines deployed in Ayungin Shoal to guard our territory,” Aquino said in Filipino.

He mentioned again how the nine Marine soldiers led by Lt. Mike Pelotera were forced to stay at the BRP Sierra Madre for nearly five months because the ship that carried the troops that were supposed to replace them was “repeatedly blocked by foreign vessels.” He did not mention China.

“It was like they were driving us away from the territory that is really ours,” Aquino said.

The President lauded the Navy officers and sailors who commandeered the ship that was blocked by the Chinese Coast Guard on March 29 for not allowing themselves to be intimidated and for not turning back.

The mission was able to bring a fresh batch of Marine soldiers to the Sierra Madre, finally relieving Pelotera and his men after 138 days at sea.

The President vowed that the days when the military, including the Navy, had been ignored, were over.

“We will end the era in our history where you perform your tasks through sheer heart and wit. We will push for the modernization and upgrading of the capabilities of the Armed Forces,” Aquino said.

Aquino placed full trust in the leadership of Millan, the 34th FOIC, saying he expected the new Navy chief to continue the programs that were started by Alano to harness  the Navy’s capabilities.

The President praised Alano for the hard work he showed for nearly 14 months as the Navy chief, dealing with one crisis after another, and more importantly, ensuring the constant patrol of Philippine territory, particularly the West Philippine Sea.

Millan told the Inquirer in a phone interview that he would continue the programs spearheaded by Alano and other Navy chiefs before him under the Navy Sail Plan.

The plan is designed to build a Philippine Navy “that is more responsive” to both its traditional duties of territorial defense and new security challenges, such as climate change.

As the Armed Forces of the Philippines shifts from internal security operations to its mandate to address external threats, the Navy needs to be developed with the Army and Air Force, Millan said.