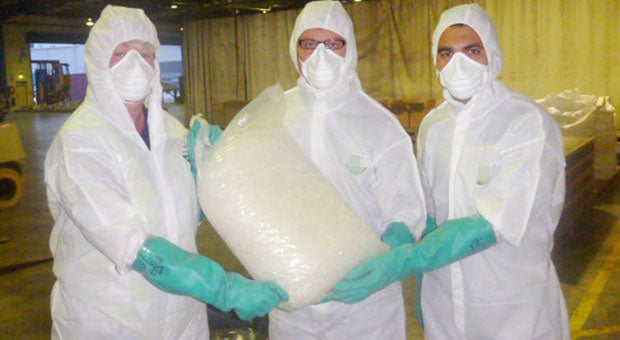 This file handout photo received on February 28, 2013 shows Australian Federal Police officers with some of their largest ever seizure of methamphetamine, with an estimated street value of around $US 446 million. AFP

The government-run Australian Crime Commission (ACC) said in a report that the situation was “gravely serious”, with international cartels at the heart of the problem.

“Illicit drug use in Australia, and the profits gained from it, is directly linked to transnational organized crime groups that are implicated in large-scale criminality and corruption overseas.”

Police have previously said Australia’s wealth and the strength of the Australian dollar meant traffickers were pouring drugs into the country.

“Australians, for whatever reason, are prepared to pay a high price for illicit drugs, probably because they can,” ACC official Judy Lind told reporters.

“And in the last four or five years, international drug cartels have cottoned on to that.”

While cannabis continues to dominate the Australian market, the prevalence of cocaine and performance-enhancing drugs was also at record highs.

There was also a massive surge in the availability of ice — or crystal methylamphetamine — which is now second only to cannabis in popularity, with seizures up more than 300 percent in a year.

Jevtovic said the issue was a “national concern”, with the drug linked to violent assaults as users can become highly aggressive, and compared it to the crack crisis that gripped the US in the 1980s and 1990s.

“With its relative accessibility, affordability and destructive side-effects, crystal methylamphetamine is emerging as a pandemic akin to the issue of ‘crack’ cocaine in the United States,” he said.

“Ice is a devastating, insidious drug. It affects everyone from users, their families, and their communities, and the authorities who deal with the users,” he said, adding that the report provided authorities with a robust picture of the illicit drug market.

“The information released today is as encouraging as it is challenging. Law enforcement is making significant inroads in the fight against illicit drugs. We’re detecting more criminals and disrupting more illicit drugs before they hit the streets,” said Keenan.

“But there is much more work to be done and this report also provides critical evidence so that decision makers and law enforcement officers can develop further strategies to undermine the business models of organized crime and combat the threat of illicit drugs.”