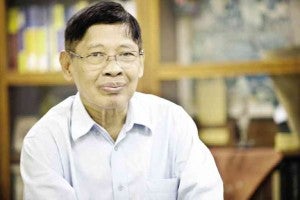 “DOC MARA” was an Outstanding Young Scientist and was listed in the World Directory of Mathematicians.

In the early 1980s, when I was in fourth year high school, our team won the silver medal in a mathematics competition.  A gentleman smiled gently as we shook his hand onstage.  I did not know his name then, but I never forgot his shy smile.

A year later, as a college freshman at Ateneo de Manila University, I immediately recognized my professor in advanced placement calculus  as the judge with the shy smile:  Jose A. Marasigan, or “Doc Mara,” one of the greatest Filipino mathematicians ever.

On the first day of class, Doc Mara launched into the Bouffon Needle Problem:  Imagine a floor made of parallel wooden strips of the same width.  If we drop a needle onto the floor, what is the probability that the needle will touch two strips?

After drawing the problem on the board, he announced, “At the end of the semester, you should be able to solve this.”  I was immediately hooked.

After receiving his doctorate in Germany, he returned to  Ateneo, teaching in the college and becoming chair of the math department from 1973 to 1983.

A Young Mathematician grantee of the International Math Union, Doc Mara became a visiting full professor at Iowa State University in the 1980s.

He spearheaded Ateneo’s applied math, major in finance track.  An advocate of math education, he edited a grade school textbook series with me.

Problem solving was what Doc Mara loved most.  In the mid-1980s, he established the Philippine Math Olympiad and, in 1988, coached the first Philippine team to the International Math Olympiad (IMO), the most prestigious math contest for high schoolers in the world.

Victor Luchangco, an Ateneo senior, got an honorable mention on our first try. Doc Mara served as coach until 2005.

By then, he had created the Program of Excellence in Math, which aims to train talented students for global competition.  From 2001 to 2011, Doc Mara served as a judge in the Ateneo Math Olympiad, patterned after the IMO.

An Outstanding Young Scientist, Juan Salcedo Jr. Science Educator award winner and Ateneo Most Outstanding Senior Lay Teacher, Doc Mara has been listed in the World Directory of Mathematicians since 1979.

Although Doc Mara seemed diffident, he was a prankster.  When a classmate nodded off in class, he gave us a horrendously difficult surprise quiz, which no one could answer (the quiz was on a topic two chapters ahead).  The quiz did not count toward our average—though we did not know it then—but none of us ever dared so much as yawn thereafter.

Another time, he displayed Fermat’s Last Theorem (we did not yet know it was the famous math problem) and promised an automatic final grade of A to anyone who could prove it.

The theorem looked so simple that we tackled it at once, to no avail.  No Internet existed then, so we spent days poring over library materials.

I am certain that never in the history of the Ateneo library had so many students swarmed the math section at one time.

None of us succeeded, of course, but not for want of trying.

I took practically every subject Doc Mara taught that I ended up with more units than required.  I never regretted the extra load, because whether it was Boolean algebra or

Doc Mara eventually became a colleague, mentor and friend.  He offered wise advice on how to motivate students.  He loved gardening and, though he never married, he doted on children.

His last request of me was for my son Scott’s travel books, which he wanted to give the kids in his household.

Doc Mara had been battling kidney problems and late last year, we held a tribute in his honor.  Though frail, he gamely stayed till the end of the program, as students and friends, past and present, gave him a hug or a handshake.