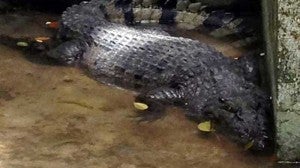 LARGEST FRESHWATER CROC “Malang,” a Philippine freshwater crocodile caught by fishermen in M’lang,North Cotabato province, is believed the largest of its kind in captivity. FILE PHOTO

MLANG, North Cotabato, Philippines—While most residents of this town were in slumber, Malang, the 2.18-meter freshwater crocodile that has been in captivity here since April 12, “escaped” from his 10×10 meter temporary cage, officials said.

Hernand Dapudong, a member of the municipal disaster risk reduction and management council, said about midnight on Tuesday, the reptile – touted to be the largest freshwater crocodile in captivity caught from Liguasan Marsh so far — “strolled” towards the town plaza and was eventually recaptured on the road leading to the public market.

Malang was being kept in a 2.5-feet high concrete enclosure built between the municipal hall and the public gymnasium here. The cage was about 20 meters from the town plaza.

Dapudong, who has been taking care of the beast since it was turned over to the town government by the fishermen who netted it from the Ligusan Marsh, said they only discovered that the fresh water crocodile managed to breach its cage when they got reports from joggers that a similar reptile was spotted near a ditch on the road leading to the town market.

The last time they checked on Malang, he said, was on Tuesday night.

In between his estimated escape time and the moment he was recaptured, Malang was an escapee for approximately five long hours.

“Nothing to worry, Malang is now back in our custody,” Mayor Joselito Piñol said.

Dapudong, who also serves as Piñol’s executive assistant, said he and his 18-year old son rushed to the site where Malang was spotted.

“I threw my face towel on Malang’s eyes so it cannot see humans, grabbed its head and tied the reptile’s mouth,” he said.

Dapudong said Malang did not resist.

It took him, his son and some joggers 10 minutes to “retrieve” the beast from where it was found, about 100 meters away from the temporary cage.

Dapudong said he was confident the beast would not harm him because he has been the one feeding it with African catfish thrice a day.

“I didn’t feel any fear because he seems to be close to me,” he said.

Piñol said they later found out that the large rock put inside Malang’s cage was instrumental for the beast’s escape.

He said crocodile experts had told them that Malang might have held tight on the rock, swerved his tail above the cage before sliding out in reverse.

As an added precaution, a tarpaulin was also laid over the lid of the cage.

“It was dangerous because he could have harmed somebody,” he said of the beast’s escape.

Piñol meanwhile said Malang would be sent back to the wild next week after the Department of Environment and Natural Resources has given its go signal.

“We will send Malang back to the wild and to its natural habitat.  We are not making it as tourist attraction,” he said.

Malang is believed to be the largest Philippine freshwater crocodile (Crocodylus mindorensis) ever caught. The critically endangered species can grow to a maximum of 3.05 meters, according to wildlife journals.

But local DENR officials said there could be freshwater crocodiles larger than Malang, which have been living on the 220,000-hectare Liguasan Marshland straddling the provinces of North Cotabato, Maguindanao and Sultan Kudarat.

Malang’s kind is relatively small compared to the salwater species, which can grow massively.

Lolong, the 6.09 meter crocodile netted at the Agusan Marsh last year was of the saltwater species.

‘Malang’ next crocodile attraction after ‘Lolong’