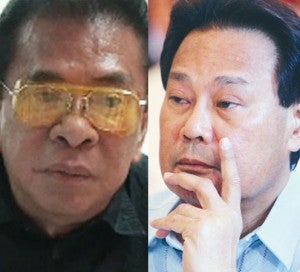 MANILA, Philippines—The Sandiganbayan on Friday issued hold-departure orders for former Chief Justice Renato Corona and former Ilocos Sur Gov. Luis “Chavit” Singson to tighten its grip on them while they are being tried on graft charges.

The orders mean Corona and Singson cannot leave the country without the court’s permission.

In issuing the orders, the Sandiganbayan’s Third Division said preventing Corona and Singson from leaving the country was “necessary …  to maintain the effectiveness” of its “jurisdiction over the cases and persons” of the two accused.

Corona’s case involves the perjury charges filed by the Office of the Ombudsman after his impeachment in 2012 for his failure to declare all of his assets in his financial disclosures.

The Coronas, however, have asked the Supreme Court to order the dismissal of the charges, claiming they are being persecuted and that the bank documents used as evidence against them have been illegally obtained.

In the petition they filed Thursday, the Coronas said the Ombudsman committed grave abuse of discretion by bringing charges and initiating forfeiture proceedings against them “notwithstanding the absence of any legal and factual basis to support [its] erroneous finding of probable cause” to prosecute them.

“These acts of the Ombudsman betray a strong desire to persecute rather than prosecute,” they said.

They said the bank certifications used by the Ombudsman to show they had substantial peso and dollar deposits in their joint accounts were illegally obtained and could be considered “fruits of the poisonous tree.”

The Coronas asked the Supreme Court to nullify and set aside the Ombudsman’s finding of probable cause to prosecute them and to issue a permanent injunction on further proceedings initiated by the Sandiganbayan.

They also said their trial in the Sandiganbayan should be held in abeyance.

Singson’s case involves three counts of graft that the Office of the Ombudsman filed against him in 2001, alleging that he gave P26 million in public funds to a private company.

Being a private company organized for profit and not working for the interest of a particular sector, Multi-Line Food Processing is not authorized to receive aid from the public coffers, the Ombudsman said.

The Bureau of Immigration said it would enforce the hold-departure orders against Corona and Singson immediately.

Immigration Commissioner Siegfred Mison said people barred from leaving the country would be stopped at the border, but he gave assurance that those people’s rights will be respected.